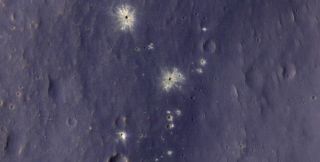 Sometime in the last decade, something heavy slammed into the Martian atmosphere and shattered into a hard rain of superheated material. Those pieces fell to the Red Planet's surface, dotting the Martian dirt with a pattern of pockmarks.

The impact craters, astronomer Phil Plait wrote on his Bad Astronomy blog, suggest that the asteroid hit Mars while in an already weakened state. Most solid rock or metal asteroids are strong enough to survive the journey through the planet's atmosphere to the world's surface. But many asteroids, he explained, have already suffered collisions during eons spent tumbling through the solar system. Those collisions can leave the space rocks weakened and covered in fissures, which split open under the intense heat and pressure of atmospheric entry.

"It's essentially an explosion, the force of the sudden and furious release of energy when it splits," Plait wrote. [5 Mars Myths and Misconceptions]

You know this happened recently on Mars because images of the same region from 2009 don't show the craters, as explained in a statement from the University of Arizona’s Lunar and Planetary Laboratory.

The new features are exciting because Mars barely changes, or changes very slowly. University of Arizona researchers counted 21 separate craters in this image taken by the Mars Reconnaissance Orbiter, with some of the features up to 23 feet (7 meters) across. They span an area just over 1,000 feet (305 m) across.

"This is a not-so-gentle reminder that although we may think of Mars as not being a terribly active world, especially when compared to Earth, there's still stuff going on there … even if it means importing the action from space," Plait wrote.

And as Live Science has previously reported, "action" like this isn't terribly uncommon in our solar system. In fact, Earth and the moon seem to be going through a bit of a spike in impacts compared to billions of years in the past.