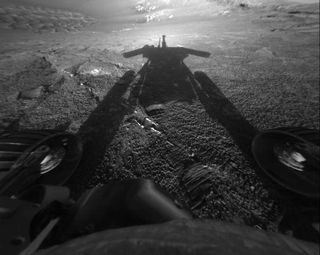 NASA's Mars rover Opportunity reveals its shadow, seen on July 26, 2004, and snapped by the rover’s front hazard-avoidance camera. At the time, Opportunity was moving farther into Endurance Crater in the Meridiani Planum region of Mars.
(Image: © NASA/JPL-Caltech)

NASA's Opportunity Rover has died on Mars. The little solar-paneled robot apparently ran out of battery power during the Red Planet's awesome 2018 dust storm, and after one last attempt to contact it, NASA concluded yesterday (Feb. 13) that the far-off explorer is no more.

Which raises the question: What's going to happen to its body?

But Tesla Roadsters have lots of organic fibers and plastics in their bodies. Mars rovers are made of tougher stuff. [Voyager to Mars Rover: NASA's 10 Greatest Innovations]

Jeff Moersch, a professor of planetary science at the University of Tennessee, Knoxville, and a member of the Opportunity team, cautioned that he's not an expert in the rover's engineering. But he said that Opportunity does have some plastic bits that might eventually break down under the glare of the sun — its insulation, for example.

"But, by and large, I think it'll look pretty much as we left it," when and if astronauts ever do come across its resting place, Moersch told Live Science. It'll probably be pretty dusty, though, he added.

That's assuming that astronauts do make it to Mars in the relatively near future — the next century or two, for example.

Over much longer periods, Moersch said, dust will settle on the rover. Opportunity functioned as long as it did because regular Martian winds tended to routinely blow dust off its body. But over longer periods, it's a bit of an open question whether the dust or the wind will win out.

"I doubt it will end up buried in a mound, though," he added.

What about millions of years in the future? On Earth, anything old and dead and sitting in one place on the surface tends to eventually end up underground. But that's thanks to the effects of water and plate tectonics, Moersch said — factors that aren't present in the same way on Mars.

"Over the very long-term, you're going to get impacts that knock up ejecta [airborne Mars dirt] from where they hit, and that ejecta will very gradually resurface [on] the planet and bury things that were on the surface," he said.

If Opportunity were to be left on Mars, aliens who landed there millions and millions of years from now would find the rover somewhere in the rock record — much like how paleontologists find dinosaur fossils here on Earth.

But NASA is hoping to send humans to Mars one day. And there are dreams of establishing some sort of human settlement there. Steve Squyres, a professor of astronomy at Cornell University in Ithaca, New York, and head of the Opportunity science mission, made clear during NASA's press conference announcing the rover's death that the agency has no plans to bring the rover back to Earth. (Why would we spend the money bringing material back from Mars when we already know exactly what it's made of? he asked.)

That said, Moersch added, when humans do settle Mars, it's not unreasonable to imagine they might make some effort to recover and preserve Opportunity. Perhaps it could end up in museum, or the region explored by the rover might end up as a national park.

Of course, if humans never get there, Opportunity might not make it into the fossil record at all. It's at least plausible that, given millions of years, a meteor could strike it directly and smash it to bits.