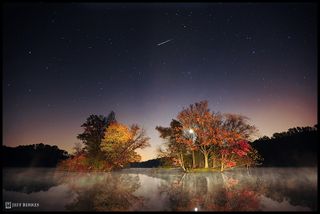 Meteorites originate in space, often in the asteroid belt between Mars and Jupiter. A small percentage of these bits of outer space survive the trip to Earth's surface, but those that do can make for some tantalizing tales or even hint at future calamity. Here are five stories behind pieces of asteroids, the moon and Mars that go up for sale in a public auction in Manhattan on Oct. 14, 2012. [See Photos of the Meteorites]

The only known fatality

On the evening of Oct. 15, 1972, farmhands in Trujillo, Venezuela, heard a sonic boom. The next morning, a large rock was found alongside a dead cow with a crushed neck and clavicle. Years later, scientists confirmed the rock, which in the meantime had served as a doorstop, was a meteorite, according to the catalog description of New York City's Heritage Auctions for a partial slice of the Valera meteorite.

This is the only known meteorite responsible for a fatality, at least to date.

"It is going to happen, and it's going to be a very sad day. It is inevitable that people will be killed by a meteorite," said Darryl Pitt, the meteorite consultant for the auction. He added that when he speaks to children, this is the first thing they ask about. He said he tells them to "worry about the things they have control over."

An 'accident' with a Chevy

Almost 20 years ago, on Oct. 9, 1992, video cameras at Friday night football games in the northeastern United States caught the fiery descent of a meteorite that would end its fall by punching through the trunk of a red Chevy Malibu parked in Peekskill, N.Y. The owner of the car, 18-year-old Michelle Knapp, sold the car within a week for 25 times the $400 she paid for it when buying it from her grandmother, according to the catalog.

Not only are two pieces of this meteorite for sale, collectors also have a chance to purchase the original title to the Malibu and the bulb from the rear tail light, which exploded when the car's trunk was punctured by the meteorite.

The only asteroid tracked to Earth

The potential for a devastating impact from an asteroid or comet is real, and astronomers are keeping an eye out for this type of threat.

On Oct. 6, 2008, Richard Kowalski, at the Catalina Sky Survey, spotted a new asteroid, dubbed 2008 TC3, on a collision course with Earth. For the first time, astronomers around the world tracked the asteroid's approach for the day before it hit Earth. The asteroid exploded upon entering Earth's atmosphere, and as predicted, it fell in the Nubian Desert of Northern Sudan, where 35 pounds (15.9 kilograms) of meteorites were eventually found.

Much of its mass is believed to have been vaporized or to have disintegrated when it hit Earth's atmosphere. It was renamed Almahata Sitta, Arabic for "station six," a railroad stop on the line to Khartoum near where the meteorites were found, according to the auction catalog description.

In 1492, a stone fell from the sky outside the walled city of Ensisheim, located in the Alsatian region of France, preceded by "a great thunder clap, then a long noise that was heard far around," the auction catalog quotes a 16th-century document. The stone's descent was seen as a sign from God; the extraterrestrial origin of meteorites would not be accepted for another 300 years. The Ensisheim meteorite was brought into the city and chained up in church to keep it Earth-bound. It is Europe's oldest preserved meteorite.

Hopes for a cure

On Aug. 14, 1992, residents of the Nigerian city of Mbale heard a loud explosion that became a rumbling, accompanied by a white smoke trail in the sky. Then rocks rained down, pelting an area of about 1.9 by 4.3 miles (3 by 7 kilometers). One small meteorite even struck a young boy after ricocheting off a banana tree. Because the region was being ravaged by AIDS, Mbale residents believed the meteorite shower brought a cure from God, and they ground up the stones into a paste that was eaten or applied topically, the auction catalog recounts.

Within several months, 426 stones weighting 238 pounds (108 kilograms) had been recovered from this large meteorite shower.

The auction, held by Heritage Auctions, is scheduled to take place on Sunday, Oct. 14, 2012, at the Fletcher-Sinclair Mansion at 2 East 79th Street in Manhattan.