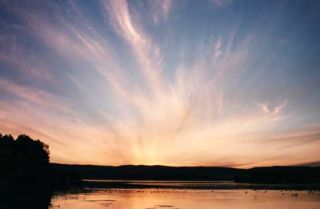 Cirrus clouds are made of ice particles and can cover 30% of Earth's atmosphere.
(Image: © Michael Thompson / NASA)

Give the upper atmosphere dust, and it will make cirrus clouds.

It has long been a mystery exactly what causes the formation of cirrus clouds, the wispy billows of ice that can be seen high in the sky. But new research, detailed in the May 9 issue of the journal Science, finds that the clouds condense and freeze, or nucleate, on very specific mineral and metal particles high in the atmosphere. That makes cirrus clouds unique: Most other clouds form primarily by condensing onto organic particles, said study author Dan Cziczo, an atmospheric chemist at the Massachusetts Institute of Technology.

It's important to know how these clouds form, as they can cover up to 30 percent of the Earth's atmosphere at any given time, and have a big effect on the climate, Cziczo told OurAmazingPlanet.

In fact, clouds have about 10 times the impact on climate that man-made greenhouse-gas emissions do, said Brian Toon, a researcher at the University of Colorado at Boulder who wasn't involved in the study. "The largest uncertainty in understanding climate change is understanding clouds, since they are so much more important," he said. [The Reality of Climate Change: 10 Myths Busted]

The new study shows, however, that humans actually impact the formation of cirrus clouds (just as climate change affects cloud formation and vice versa, in little-understood ways), by sampling the ice crystals making up the clouds and seeing what particles they formed on. Although mineral particles have always found their way into the upper atmosphere, where cirrus clouds hang out, humans have increased the amount of mineral dust that arrives there through land-use changes such as deforestation and land development, Toon said. Cziczo estimates that the level of these minerals has increased by about 50 percent since the beginning of industrialization. Metallic particles are also introduced by humans through the burning of fossil fuels and other industrial activities, he said.

But how does this affect the amount or size of cirrus clouds? It's too early to say, Cziczo said, but the data from the study will help improve computer models of climate change. Toon said more mineral particles kicked up by humans could equate to more cirrus clouds, although there are many other factors that complicate the situation.

It's also unclear how cirrus clouds might affect the climate. Depending on their location in the atmosphere, they can either help cool the Earth or warm it up. Unlike liquid water clouds, which generally cool the Earth by reflecting sunlight, ice clouds can help warm it up by absorbing reflected heat, Toon said.

Cirrus clouds are unique in that they are made up of ice crystals, whereas most other clouds contain condensed droplets of liquid water. When most people think of clouds, they picture these liquid water clouds, which exist closer to the Earth's surface and are responsible for rainstorms and other weather, Cziczo said.

Analyzing chemicals within high-altitude ice crystals is no easy task. To do so, Cziczo and his colleagues partnered with NASA to use two of its research airplanes. Up in the air, they used a device called a counterflow virtual impactor. This device acts like a hair dryer, Cziczo said.

"The inlet flows gas out the front of the plane. This stops the small particles we don't want to sample and only lets in the big ice crystals,” he explained. “You can imagine that if you drop a Ping-Pong ball on a hair dryer, the flow of air stops the Ping-Pong ball. But if you drop a bowling ball on the hair dryer, it has no effect. Same thing for particles versus ice crystals."

The warm air then melted the ice, and the researchers analyzed the particles using a mass spectrometer they took up in the airplane with them, Cziczo said.