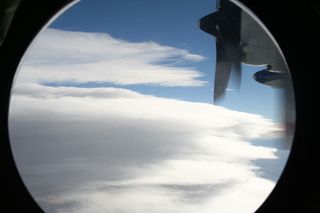 The view from the plane as scientists sampled the clouds. Their measurements showed that biological particles, such as bacteria, pollen, and fungi, act as nuclei for formation of ice in clouds.
(Image: © NCAR)

Germs really are everywhere: Bacteria, fungal spores and other biological detritus have been found in clouds and likely help to form the cores of cloud droplets, scientists have found.

The study of the role that these biological particles play in cloud formation could help refine one of the biggest uncertainties left in climate change predictions — how clouds influence climate.

Scientists have long known that microorganisms, or parts of them, can become airborne and travel great distances. Leaves fall off trees, dry up and crumble then get whisked away by the wind, for example. The same can happen to fungal spores and even bacteria. Whether any of the airborne microbes are still alive or not, the scientists can't say, because they did not test for that.

Likewise, laboratory experiments have shown that these particles (along with dust and other aerosols, or tiny particles suspended in the air) can act as ice nuclei, the skeletons of clouds. Around these nuclei, water and ice in the atmosphere condense and grow, forming clouds and eventually perhaps leading to precipitation.

"Understanding which particles form ice nuclei, which occur at extremely low concentrations and are inherently difficult to measure, means you can further understand processes that result in precipitation," said study team member Kim Prather of the Scripps Institution of Oceanography in San Diego, Calif.

While most scientists accept that biological particles form clouds, actually catching them in the act has been a trickier prospect.

"This really has been a holy grail measurement for us," Prather said.

Prather and her colleagues hoisted a mass spectrometer, which tells scientists what elements are present in a sample, onto an aircraft and flew it through clouds in the skies of Wyoming in the fall of 2007. The effort got them the first-ever detection of biological particles within ice clouds.

Just what the biological material was, the researchers can't say.

"With the technique we used, we can only tell that it's a biological particle," said Karri Pratt, a graduate student at the University of California, San Diego.

The team was able to use air pattern models and the chemical composition of the dust to find the particles' source, which was likely Asia or Africa.

The findings, detailed in the May 17 online edition of the journal Nature Geoscience, suggest that microbes and other biological particles get swept up in dust storms and travel long distances where they help induce the formation of cloud ice.

These study results can be used to further refine climate models that attempt to represent the impacts of clouds on climate, whether that's cooling by radiating back light, warming by trapping heat or changing precipitation patterns.

"If we understand the sources of particles that nucleate clouds and their relative abundance, then we can determine the impact of these different sources on climate," Prather said.