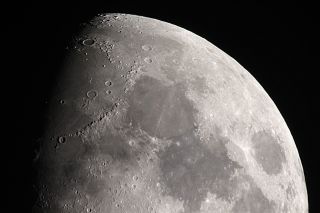 Just one month after proclaiming his administration's mission to go back to the moon before going to on to Mars, President Donald Trump seemed to completely shift spaceflight gears in a confusing tweet June 7.

"NASA should NOT be talking about going to the Moon - We did that 50 years ago," Trump said in the tweet, "They should be focused on the much bigger things we are doing, including Mars (of which the Moon is a part), Defense and Science!" [5 Mars Myths and Misconceptions]

(Of course, everyone knows that the moon is not directly part of Mars; it's Earth's moon, though going to the moon is considered a stepping-stone to reach the Red Planet.)

In response to the tweet, Twitter responses and headlines alike speculated that Trump was upending his long-stated goals to return American astronauts to the moon (and that Trump was missing some solar system facts related to Earth's moon and Mars).

NASA Administrator Jim Bridenstine released a clarifying statement later that day, saying that the President's tweet didn't represent a change in policy and that the space agency is still on track to achieve a preliminary flight around the moon by 2022. In fact, returning astronauts to the moon is a key preliminary step to reaching Mars — the moon could be a valuable refueling site before the ensuing nine-month-long trip.

But the Tweet wasn't completely harmless, according to The Planetary Society, a nonprofit dedicated to space research and education. Its spokesperson saw the confused nature of the tweet, rather than the policy implications it represented, as an impediment to future space exploration.

"Success in human spaceflight requires consistency and clarity in national policy," The Planetary Society tweeted in response to Trump. "The White House needs to clarify its expectations so that NASA can achieve great feats of science and exploration."

Consistency and clarity are particularly necessary because of the amount of time such a massive space exploration project takes to complete, explained Casey Dreier, the senior space policy adviser at The Planetary Society. "It's going to take longer than a single presidential term. And to build support, you need stability," he told Live Science. Without a clear government position, it's hard to build that support among constituents and work steadily toward the goal of space exploration. The tweet "makes it harder to demonstrate that there is a consensus in the White House" around space exploration, he added.

The media's reaction to the tweet may have been as confusing as the tweet itself, said John Logsdon, a political scientist at George Washington University, who specializes in space policy. Much of the media treated the tweet as though it represented an actual policy change, which isn't the case, he added.

"Reacting to Mr. Trump's tweets as though they represent a change in policy is overblown and basically dangerous in terms of continuity in what the government is doing," Logsdon told Live Science, "We had this rather confused tweet from Mr. Trump, but there's been a lot of confused tweets from Mr. Trump. So, you know, so what?"

Part of the reason for the confusion is the apparent shift away from what had been an ambitious space exploration policy. Earlier this year, Vice President Mike Pence put forward a plan that is intended to push up moon exploration to 2024, four years earlier than was originally planned. NASA recently asked Congress for more funding in order to achieve this goal, according to Scott Pace, executive secretary of the National Space Council.