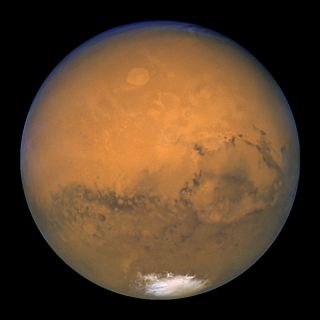 After the red dust settles from President Barack Obama's reiteration of his ambitious goal to have humans reach Mars in the next two to three decades, the next question becomes: What will it take to get there?

"We have set a clear goal vital to the next chapter of America's story in space: sending humans to Mars by the 2030s and returning them safely to Earth, with the ultimate ambition to one day remain there for an extended time," Obama wrote in an op-ed on CNN.com yesterday (Oct. 11).

NASA has laid out detailed plans for the journey to Mars. It's feasible to get there by the 2030s — if that deadline is stretched out to the last year of the decade, said John Logsdon, a professor emeritus of political science and international affairs at the Space Policy Institute at The George Washington University in Washington, D.C. [5 Mars Myths and Misconceptions]

Other experts say Obama's stated timeline is not bold enough.

"We are far closer today to sending humans to Mars than we were to sending men to the moon in 1961, and we were there eight years later," said Robert Zubrin, president of nonprofit organization The Mars Society and the author of "The Case for Mars: The Plan to Settle the Red Planet," (Free Press, 2011). The next president should announce an ambitious goal to get to Mars by the end of the second term, or by 2024, Zubrin said. Otherwise, the momentum for the mission could be lost, and space exploration could be delayed further, he added. [SpaceX to Mars: Awe-Inspiring Video Shows Vision for Red Planet Exploration]

Either way, before astronauts start packing their spacesuits and intergalactic playlists, scientists have to sort out a few problems.

Step 1: Build American technology to get astronauts to space

Currently, the United States relies on a Russian Soyuz spacecraft to get astronauts to the International Space Station. That is set to change, as private spaceflight companies have taken on the challenge of building a system to launch humans and cargo spaceward: Elon Musk's SpaceX is working on the Dragon robotic launch vehicles, while Boeing is building its CST-100, Logsdon said. Musk has also said that SpaceX's robotic launch vehicle could head off to Mars as soon as 2018. (A launch vehicle is a rocket-powered vehicle designed to send spacecraft or satellites into space.)

A Mars voyage requires a spacecraft that can carry multiple people, along with all the supplies for a three-year round-trip, including potential cargo items, said Bret Drake, an engineering specialist with Los Angeles-based Aerospace Corp., a nonprofit organization that researches launch vehicles, satellite systems, ground control systems and space technology for the federal government.

"To sustain a crew all the way to Mars means being able to launch rather heavy payloads, because you have to have the fuel and supplies for the round-trip," added Logsdon. "And there's no 7-Eleven on Mars where you can stock up to come home," he told Live Science.

One alternative is to create a giant spacecraft; another is to develop multiple smaller modules that can be launched separately into orbit and then assembled in space, Logsdon said. (Some of these modules could hold people while others could hold supplies, for instance).

Either way, the basic technology is there, Zubrin said. "It has to be larger than any we've built before," he said. Even so, "there isn't new science here."

Currently, Lockheed Martin is developing a four-person spacecraft called the Orion, which will sit atop the heavy-lift launch system, called the Space Launch System (SLS), that NASA is developing to take people into deep space. Orion already completed one successful test flight on Dec. 5, 2014, and is set to take a trip around the moon in 2018.

Launching a bigger spacecraft into deep space requires bigger rockets on any launch vehicles used. NASA plans to conduct a second test of what will be the world's largest rocket, which will be part of the SLS, sometime in 2021, according to NASA. SpaceX is also developing the Falcon Heavy rocket, which is designed to launch heavier payloads, including people, into space.

After people enter Mars' orbit, they need to land on the Red Planet. With past missions, friction, thermal effects and parachutes could provide the deceleration needed to land. But a parachute won't have enough stopping power for such heavy crafts.

However, scientists are making progress on that front.

For instance, SpaceX has shown that high-speed crafts can decelerate using supersonic retropropulsion, which involves firing engines while landing, Drake said. "We now have a feasible technical solution for how to get large vehicles to the surface of Mars," Drake said.

Step 5: Figure out long-term habitation on a space station

Astronauts have logged many weeks and months on the International Space Station (ISS), demonstrating the feasibility of long-term habitation systems, such as those that provide safe water, process waste, and filter air in space. Similar systems could be used for a stay on Mars, experts say.

The difference, however, is that the ISS is in low Earth orbit, just a few hours' trip to the home planet. If anything breaks, Earth can still come to the rescue. That won't be possible on Mars, which is at least a six- to nine-month journey, even when the planets are at their closest point to each other.

The first "can be mitigated by proper vehicle design, along with a dedicated storm shelter, such as a water wall made from the life-support system water supply," Drake said. (This would involve literally lining the walls with the water used for drinking and showering.)

Shielding people from galactic cosmic radiation is trickier. In free space, cosmic radiation levels are extremely high. However, the Mars Science Laboratory, which landed on the Martian surface aboard the rover Curiosity, has measured cosmic radiation levels and showed that radiation exposure at the surface of the red planet is similar to levels seen aboard the ISS, Drake said. Because the ISS is located in low Earth orbit, it is below the two doughnut-shaped radiation belts called Earth's Van Allen belts, which block from Earth many of the charged particles spewed from the sun, as well as from cosmic rays, Logsdon said.

One strategy may be to make the trip through free space very quickly, minimizing the exposure to the area with the highest radiation, Drake said.

"It's safer to be on the surface of Mars than free space," Drake said.

Before making the three-year round-trip to Mars, many of these long-term space systems will be tested in cislunar orbit, according to NASA's timeline of the journey to Mars. Sometime between 2018 and 2030, NASA plans to send crewed missions on spacewalks in the region of space near the moon. Some of these missions could last a year, in preparation for the epic voyage to Mars.

The plans also include a trip to redirect and sample material from an asteroid.

This will provide an opportunity to test out all of the elements of the Mars mission, while not being too far from Earth in case something goes wrong, Logsdon said.

Once people have taken the effort to get to Mars, they won't just turn around. The outbound voyage would take six to nine months, but explorers can't return until Mars and Earth are in good alignment relative to the sun, which could take 14 months, Logsdon said. (The return trip will be much shorter if the Earth and Mars are on the same side of the sun, rather than on opposite sides.)

In a way, Mars pioneers would be similar to "the explorers of the 16th century that went on ships across the ocean and were gone from their home country for a long time," Logsdon said.

Given that, it makes sense to make some kind of permanent structure, Logsdon said.

"You need, on the Martian surface, some sort of habitat," Logdson said. "You're not going to live inside a spacesuit all the time. Though it seems far-fetched, the movie "The Martian" showed a relatively realistic depiction of a potential Mars living setup, he added.