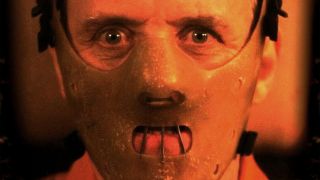 In "Silence of the Lambs," Hannibal Lector (Anthony Hopkins) boasted about dining on human liver with fava beans and a nice chianti.
(Image: © Allstar Picture Library/Alamy)

For most modern societies, cannibalism is an unthinkable act of violence and is strictly taboo. Recently, researchers investigated how mental illness might, in very rare and extreme cases, lead a person to break that grave prohibition.

Scientists recently reviewed five medical case studies of male patients ages 18 to 36 who had practiced pathological cannibalism — or cannibalism as a result of mental disease. All of the patients were residents at a psychiatric facility in Villejuif, France, over a period of 20 years, the researchers reported in a new study.

By examining the patients' histories and details of their diagnoses, the scientists hoped to discover behavioral patterns that could explain what triggered the cannibalistic acts. [Zombie Diet: 10 Real-Life Examples of Humans Eating Humans]

Evidence of cannibalism in humans dates back to our relatives that lived 900,000 years ago; it has been documented in our extinct cousins, the Neanderthals, about 100,000 years ago, and the act is preserved in Ice Age bones dating back more than 17,000 years ago. The practice has persisted in some human societies, linked to rituals and social practices; it has also been documented under circumstances of severe starvation — several incidents were reported in 2013 in impoverished regions of North Korea.

But pathological cannibalism is extremely rare and is thought to occur in two types of individuals: those suffering from severe psychotic mental illness and those experiencing extreme forms of significant paraphilia — sexual desires gratified by dangerous activities, according to the researchers. Their findings were reported in a study published online June 3 in the Journal of Forensic Science

Based on existing records, the study authors divided the patients into two groups: those with severe schizophrenia and those suffering from mixed personality disorder "with sadistic and psychopathic features associated with paraphilia." All of the patients had dysfunctional childhoods that exposed them to sexual abuse, violence at home or emotional neglect, according to the study.

Fantasized for "many years"

The two patients in the mixed personality disorder group were unconcerned about social taboos; in fact, they admitted to cannibalistic fantasies or plans "going back many years," the researchers wrote. What led them to attack and eat their victims? "Feelings of humiliation seem to be the trigger, and both patients assaulted their victims at a time when they suffered a loss of self-esteem," the scientists said. The cannibalism was also accompanied by sexual acts involving the victims.

By comparison, cannibalism in the three patients who suffered from schizophrenia followed an outburst of sudden violence. All of these patients attacked and ate parts of their parents’ bodies. The researchers discovered that there was a history of emotional friction and hostility in these parent-child relationships.

The authors concluded that the schizophrenia group performed cannibalism as a very extreme reaction of self-defense to a threat of destruction — physical or psychological. For the patients with mixed personality disorder, cannibalism boosted their self-esteem and relieved tension; "ego and narcissism are the central issue, with a desire to overcome deep-rooted frustrations by means of an extraordinary act," according to the study.

Because only five cases were reviewed for the study and all of the subjects were males, the findings are not meant to be broadly applied to other cannibalism cases, the researchers wrote.

What's more, each case is clinically complex and so requires further analysis to untangle the web of environmental and individual factors that may lead to cannibalistic acts.

"While the biography, the diagnosis or the relational mode of these patients may highlight the reasons behind their assault, the nature of the act remains a mystery," the study authors reported.