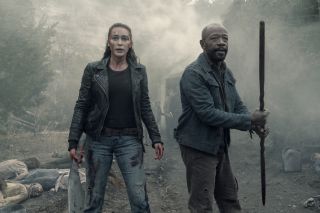 In AMC's "Fear the Walking Dead," the number one fear is the fear of becoming lunch for vicious human corpses.
(Image: © AMC)

In AMC's "Fear the Walking Dead," returning Sunday (June 2) at 9 p.m. EDT/8 p.m. CDT, undead human corpses roam the world in their hunt for human flesh. Now, we know zombies aren't real, but cannibalism is far from fictional. Here are 10 real-life examples of human flesh-eaters that are just about as horrifying as zombies.

Cannibalism goes way, way back. Around 900,000 years ago in what is now Spain, Homo antecessor, an ancient relative of humans, practiced cannibalism likely out of practicality, according to a study published in June 2019 in the Journal of Human Evolution. Fellow hominins were moderately nutritious and easy to catch, making them an excellent prey option.

Our closer and more recent relatives, the Neanderthals, were also cannibals on occasion. Archaeologists have discovered evidence of Neanderthal cannibalism in a few different spots around the world, including a cave in El Sidrón, Spain, another cave at Moula-Guercy, France, and most recently at a cave in Belgium. Beyond cannibalism, it appears that Neaderthals also made tools out of their comrades' remains.

There are a few isolated cultures in Papua New Guinea known to have killed and eaten humans, although they likely haven't practiced cannibalism for several decades. In 2011, British television host Piers Gibbon visited the Biami people — a group who once practiced cannibalism and "were very happy to talk about it," Gibbon said. An older member of the tribe told Gibbon about one instance where members of the tribe killed two women suspected of speaking ill of a dying husband. The man said they roasted the women over the fire like pigs and cut up their flesh to eat it.

The practice of cannibalism in another Papua New Guinea tribe, the Fore people, led to the spread of a fatal brain disease called kuru that caused a devastating epidemic in the group. But not all members of the tribe died — some of them carry a gene that protects against kuru and other "prion diseases" such as mad cow. The tribe stopped practicing cannibalism in the 1950s, which led to a decline in kuru. But because the disease can take many years to show up, cases of kuru continued to pop up for decades. Researchers are working to understand how the genetic mutation works to prevent kuru and gather new insights into how to prevent prion diseases.

5. The Xiximes people of Mexico

In 2011, archaeologists reported finding dozens of human bones bearing marks of cannibalism at the ancient Xiximes settlement of Cuevas del Maguey in northern Mexico. The bones were found inside shelters dating back to the early 1400s, National Geographic reported. The Xiximes believed that eating the flesh of their enemies would ensure a prolific grain harvest.

6. The Aztec people of Mexico

The Aztecs are well known for having performed ritual human sacrifices, but there's also evidence that they engaged in ritualistic cannibalism, History reported. The bodies of sacrificed victims were likely presented to noblemen and other distinguished members of the community. Some experts suggest cannibalism among the Aztecs may have been more common during famine. Another theory posits that cannibalism was their way of communing with the gods.

7. The Wari' people of Brazil

The Wari' people of Brazil practiced cannibalism of their war enemies and their own dead. Eating their enemies was their way of expressing hatred and anger. But the group also consumed the vast majority of their dead up until the 1960s. For them, it was their way of mourning, honoring and respecting the deceased members of their tribe. Beth A. Conklin, an anthropologist at Vanderbilt University, lived with the Wari' for more than a year and published her description of the Wari' tribe's history of cannibalism in the journal American Ethnologist in 1995.

Until the end of the 18th century, it was not uncommon for Europeans to seek the flesh of a dead human for medicinal consumption, Smithsonian reported. For example, Paracelsus, the 16th-century physician, believed blood was healthy to drink. Although drinking fresh blood was uncommon, people unable to afford apothecary products would stand by at executions and pay a small fee for a cup of fresh blood from the condemned.

There are several stories of stranded explorers resorting to cannibalism in a desperate attempt to survive. One of the most famous examples is the doomed 19th century Franklin expedition that aimed to discover a sea route through the Canadian Arctic. Explorers from the two trapped ships, the HMS Erebus and HMS Terror, attempted to trek 1,000 miles (1,609 kilometers) to the nearest trading post, but their efforts were futile. For the next 150 years, researchers uncovered the explorers' remains. Scientists found cut marks on many of the bones, and signs of breakage and marrow extraction — convincing evidence of cannibalism.

10. The Aghori cult of India

The Aghoris make up a small group of extremists who live in Varanasi, India, and worship the Hindu deity Shiva. The Aghoris believe there is no difference between the pure and impure, and engage in many obscure practices, such as meditating on top of corpses and making bowls out of human skulls. They also practice ritual cannibalism, according to some reports.

Get your fill of flesh-eating gruesomeness on AMC's "Fear the Walking Dead," Sundays starting June 2 at 9 p.m. EDT/8 p.m CDT.