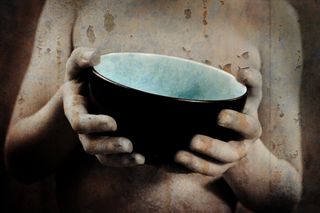 As famine grips North Korea, some reports indicate cannibalism may be on the rise.
(Image: © Suzanne Tucker | Shutterstock)

Numerous reports from North Korea indicate that starving residents of the isolated regime, where famine is an all-too-regular occurrence, may now be resorting to cannibalism.

One report from the British newspaper The Sunday Times stated that a man was put to death by firing squad after officials discovered he had killed and cooked two of his own children.

"While his wife was away on business, he killed his eldest daughter and, because his son saw what he had done, he killed his son as well. When the wife came home, he offered her food, saying: 'We have meat,'" the Times reports. "But his wife, suspicious, notified the Ministry of Public Security, which led to the discovery of part of their children's bodies under the [home's] eaves."

Another unconfirmed report details the arrest of a man who allegedly dug up the body of his dead grandchild and ate the flesh. Elsewhere, a man who reportedly killed 11 people and sold their remains as pork was executed by firing squad.

These and other disturbing news reports of cannibalism were originally relayed by Asia Press, a Japanese news agency with citizen reporters in North Korea, and published in the Times and other Western news outlets. [The 10 Weirdest Ways We Deal With the Dead]

In the spring of 2012, a drought wreaked havoc on North Korea's crops, according to the Times. Following that disaster, a severe tropical cyclone hit the country, leaving an estimated 21,000 homeless.

As a result, last year the secretive pariah state was forced to accept food aid from South Korea (its sworn enemy) for the first time in years, according to CNN.com. An estimated 10,000 people are reported to have died of hunger-related problems in the past year.

Starvation has visited North Korea regularly since the 1990s, according to the Global Post. In 2003, following another bad crop, reports of famine and cannibalism began to circulate widely, the British newspaper The Independent revealed.

Despite these disasters, North Korea has pursued an aggressive policy of saber-rattling and arms building. In April, the rogue nation announced it would launch an Unha-3 rocket to mark the 100th anniversary of the birth of Kim Il Sung, the country's founder. The launch failed, however.

And last month, North Korea sent a satellite into orbit, but it quickly tumbled out of control. International observers have described these and other launches as "provocative" acts in violation of international arms treaties.