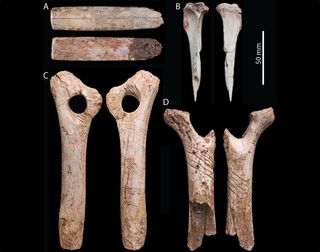 A bone from the right forearm of an adult human unearthed in Gough's Cave bears more than signs of cannibalism; researchers found zigzagging cuts that were likely intentionally engraved into the bone.
(Image: © Bello et al (2017))

More than 17,000 years ago in what is now England, people may have performed cannibalistic rituals that involved engraving symbols on human bones, new research finds.

This may be the first known instance of people engraving human bones during the Paleolithic period, or Old Stone Age, the researchers said.

The Paleolithic period spanned most of human history, and was marked by early humans' use of stone tools they formed by chipping. The period began about 2.6 million years ago with what was once the earliest known use of stone tools among ancestors of modern humans. (In the time since the period was originally defined, earlier stone tools have been found, which were crafted either by humans or their close relatives.) It ended about 10,000 years ago, with the advent of the Neolithic period, or New Stone Age, when humans invented more advanced stone tools they made by grinding or polishing.

The latter part of the Paleolithic is known for its art, such as cave paintings and antlers engraved with pictures of animals or geometric designs. "Engraving is usually considered part of a modern behavior kit, a new way of expression typical of our species," said study lead author Silvia Bello, a paleoanthropologist at the Natural History Museum in London. [25 Cultures That Practiced Human Sacrifice]

However, until now, there were no known examples of engraved human bones from the Paleolithic, except for a human skull from France that has cuts that some researchers have debated are due to intentional engraving, the scientists noted.

In the new study, Bello and her colleagues examined ancient human remains from the so-called Magdalenian culture, which existed across Europe during the later part of the Paleolithic about 12,000 to 17,000 years ago. The human bones from these sites often bear signs of cannibalism — for instance, some have cuts suggesting butchering, or breaks suggesting the marrow was sucked from them.

The scientists focused on Gough's Cave in Cheddar Gorge in England, which has one of the most extensive collections of human bones found yet from a Magdalenian site. Morbid artifacts previously discovered at this 17,700-year-old site include cups made of human skulls.

A bone from the right forearm of an adult human unearthed in Gough's Cave in 1987 not only bore signs of cannibalism, such as human tooth marks, but also unusual zigzagging cuts on one side. Previously, researchers debated whether these incisions were signs of engraving or simply the result of butchering.

To solve this mystery, the researchers on the new study used hand lenses, regular microscopes and electron microscopes to analyze microscopic features of the 87 cuts on this bone, generating 3D models of the cuts. Next, they compared these features with those from 119 engraving marks on a horse rib and a rabbit shinbone, and with those from 322 butchery marks on human and animal remains.

The scientists determined that the zigzagging cuts on the human forearm bone were likely engraved intentionally. "The sequence of modifications performed on this bone suggests that the engraving was a purposeful component of the cannibalistic practice, rich in symbolic connotations," Bello told Live Science. "In previous analyses, we have been able to suggest that cannibalism at Gough's Cave was practiced as a symbolic ritual. This study provides the strongest evidence for this yet."

As far as what these engravings might represent, "it is very difficult to interpret the meaning of a symbolic engraving," Bello said. In general, engravings are "often associated with ways of remembering events, places or circumstances — a sort of extension of our memory outside our body. In this case, however, the engraving of this bone may have been a sort of memory more directly related to the deceased, or an intrinsic part of the cannibalistic ritual itself."

In the future, Bello wants to explore other Magdalenian sites with similar artifacts.

She and her colleagues detailed their findings online today (Aug. 9) in the journal PLOS ONE.