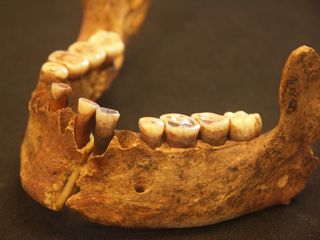 The mandible of the 'Red Lady,' one of more than 100 bones found in the burial site at a cave in northern Spain.
(Image: © (c) L.G.Straus)

An extensive investigation into an 18,700-year-old human grave in northern Spain is revealing insights about this unique woman and her culture.

The remains, which were found in the famous El Mirón Cave, were likely from a woman, whom researchers nicknamed "the Red Lady" because her bones were slathered in reddish pigment. She lived around the time of the Magdalenians, who inhabited western Europe toward the end of the last ice age.

Near the remains, the researchers found a large limestone block engraved with symbols, including a triangular shape that may represent a female pubic bone, the researchers said. [Cave of the Monkeys: Photos Reveal Early Modern Human Remains]

The Magdalenians lived in large groups in Portugal and Spain. Human remains from that period have also been found in other parts of Europe, including France and Germany.

But "this is the first actual Magdalenian burial found in the Iberian Peninsula," said Lawrence Straus, an anthropologist at the University of New Mexico in Albuquerque. Straus and Manuel González Morales of the University of Cantabria in Spain discovered the remains in 2010 and 2011, after digging at the ancient site since 1996.

"Toward the very end of this project, we decided to return to the area we had left," because they had a hunch there may be more artifacts there," Straus told Live Science.

He and his colleagues found a large block about 6.6 feet (2 meters) long and 3.3 feet (1 m) wide that had fallen from the ceiling of the cave and was engraved with lines, which the researchers estimated were etched into the rock at the end of the last ice age. As they were excavating behind this block, they stumbled across human remains, including a jawbone and shinbone covered in a red pigment called ochre.

Over the next three years, Straus and his team discovered more than 100 bones, believed to belong to a woman who was between 35 and 40 years old when she died. After her body decomposed, it was buried in a small space in the back of the cave. The researchers know this because the bones are covered in black manganese oxide, which forms as bodies decay above ground, where oxygen is plentiful.

Later, a carnivore (probably a wolf or domesticated dog) dug up the grave and gnawed on the shinbone (tibia), but the bone was later reburied with the body, Straus said.

The woman's skeleton is remarkably complete, but the skull and most of the big, long bones are missing; they were likely removed by either the carnivore or by humans who may have wanted to display them, Straus said. "The Magdalenian people did a lot of manipulation of skeletons," he added.

The Red Lady appears to have been in good health, so the researchers don't know why she died. Her diet consisted primarily of meat (ibex and red deer) and fish, as well as some mushrooms, fungi and seeds, Straus said.

The researchers performed a chemical analysis of the ochre, which was made up of sparkly crystals of hematite, a form of iron oxide, and found it was not from a local source. In other words, the people who obtained the ochre "took pains to find and grind it," Straus said. The pigment may have been used as a preservative, or as part of a ritual, he added.

The engravings on the block found near the grave may represent a pubic triangle, a shape often used in Paleolithic art to represent women, Straus said. The elaborate burial suggests the Red Lady was special in some way, he said, "but what her role was, we do not have a clue."

The new findings are detailed in a special issue of the Journal of Archaeological Science this month.