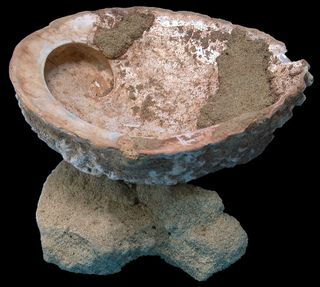 Archaeologists in South Africa uncovered two 100,000-year-old abalone shells and assorted bones and stones that served a toolkits to make some sort of ochre-based compound. The mixture may have been used as a paint or adhesive. It's the oldest evidence of humans making a complex compound, and even the oldest evidence of humans using containers. [Read the full story]
(Image: © Science/AAAS)

A group of Home sapiens came across a picturesque cave on the coast of South Africa around 100,000 years ago. They unloaded their gear and set to work, grinding iron-rich dirt and mixing it gently with heated bone in abalone shells to create a red, paint-like mixture. Then they dipped a thin bone into the mixture to transfer it somewhere before leaving the cave — and their toolkits — behind.

Researchers now have uncovered those paint-making kits, sitting in the cave in a layer of dune sand, just where they had been left 100,000 years ago. The find is the oldest-known example of a human-made compound mixture, said study researcher Christopher Henshilwood, an archaeologist at the University of the Witwatersrand in Johannesburg. It's also the first known example of the use of a container anywhere in the world, 40,000 years older than the next example, Henshilwood told LiveScience.

Along with the toolkits, Henshilwood said, the archaeology team found pieces of ocher, or colored clay, etched with abstract designs.

Reporting their results Oct. 14 in the journal Science, the researchers paint a picture of a small band of hunter-gatherers who spent very little time, perhaps a day or two, in the seaside cave 186 miles (300 kilometers) east of Cape Town.

This cave, now known as Blombos Cave, has been under excavation since 1992. The cave clearly was used as a shelter for tens of thousands of years of human history, with younger rock layers yielding evidence of cooking fires and food remains. [Read: 8 Grisly Archaeological Discoveries]

"The layer directly above this one" — the one where the paint-making toolkits would be uncovered — "was filled with shellfish and food remains, including bones and fireplaces," Henshilwood said. "But this particular layer seemed to be mainly beach sand or dune sand. And then we spotted two abalone shells." [See images of the ancient cave studio]

After three days of painstaking excavation, the archaeologists saw one of the shells was coated with a red substance.

The coating turned out to be a compound made with ocher, a soft, iron-rich clay used in the earliest forms of paint and pigment. Ocher pigments may have been used to decorate the body or clothing during the middle stone ages, but the mixture also may have served as an adhesive  —  perhaps for attaching stone tools to handles.

Lyn Wadley, an archaeologist at the University of the Witwatersrand, told LiveScience in an email: "Since ocher-rich compounds have several potential applications, it is necessary to conduct experiments to test the effectiveness of the ancient recipe as paint, adhesive or another product."

"My own experimental work suggests that the mixture would be an effective adhesive, but I have not used the specific combination of constituents found at Blombos," added Wadley, who was not involved in the find.

The combination of ingredients may not tell researchers how the ancient mixture was used, but other items reveal how it was made. Along with the shells and ocher were assorted bone fragments, including the scapula of a seal, and a number of quartzite stones that had been used to grind the ocher down.

"These were all laying right next to the shells, so each shell had its own little toolkit associated with it," Henshilwood said.

The recipe seemed to call for ground ocher mixed with bone heated to release the oils within the marrow. The heated, crushed bone was mixed with charcoal and ocher and stirred in the shells, which also bore traces of sand and quartzite chips. Some sort of liquid, perhaps water or urine, would have been added to make the pigment spreadable, Henshilwood said.

The archaeologists also found a slender piece of bone about 2 inches (6 centimeters) long, stained red on one end. It appeared the bone had been used either as a brush to paint with the pigment or as a scoop to transfer the mixture to another container.

No matter what the use of the compound, Henshilwood and Wadley agree that its existence reveals that our ancient ancestors were a clever bunch. The hunter-gatherers knew what to collect to make the paint, and they transported the ocher from 12 miles (20 km) away, suggesting smart planning. In fact, Henshilwood said, the oil-pigment-and-binders mixture they created was almost the same as paint recipes used in ancient Egypt only a few thousand years ago.

"They must have had an elementary knowledge of chemistry," Henshilwood said. "And they also had a recipe for this compound or this paint."