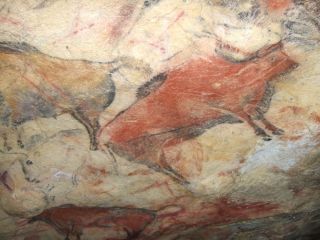 A painted bison on the ceiling of Altamira cave in Spain. The cave is closed to the public because human incursions have caused damage to the 14,000-year-old paintings.
(Image: © MNCN-CSIS, Spain)

At least 14,000 years ago, artists took to Altamira cave in Spain with charcoal and red pigments, painting bison, deer and their own handprints on the rock walls and ceiling. This prehistoric art gallery is now closed to the public, but plans to reopen it have scientists raising the alarm.

"Altamira cave, although currently closed, is at real risk," a group of Spanish researchers wrote in the Oct. 6 issue of the journal Science.

The threat, according to the scientists, is that even a limited stream of visitors will spur bacterial and fungal growth on the cave walls, damaging the very paintings tourists long to see.

The artwork already has suffered from exposure to the public, and the cave has been closed to tourists since 2002, when light-loving microorganisms were found living on the paintings. [See the Altamira cave paintings]

In August 2010, Spain's Ministry of Culture announced plans to reopen the cave, pending decisions by a panel of experts about how many visitors would be allowed inside each year. But according to the Spanish researchers, reopening could be a death knell for the art.

A history of degradation

The drawings were first discovered in 1879 by the 9-year-old daughter of an amateur archaeologist, Marcelino Sanz de Sautuola. It would take more than two decades for the scientific community to accept the Paleolithic art as genuine, but by 1955, the cave was receiving around 50,000 visitors each year, according to the National Museum of Altamira. In 1973, some 174,000 people tramped through to see the paintings.

With these visitors came carbon dioxide (from exhalations), humidity and microorganisms. In 1977, officials closed the cave to visitors to protect the paintings from degradation. In 1982 the cave reopened, this time with a limited visitation schedule of 8,500 people per year.

Even that was not enough. In 2002, the cave was closed again.

Before tourists started visiting the cave near the coast of northern Spain, it was a nutrient-poor environment, according to the Spanish researchers. There was little water and no light, and very little air was exchanged between the cave and the outside world. (Many microorganisms thrive on light, warmth and humidity.)

Now people were disrupting the cave with body heat, moisture and electrical lighting. The cave seemed at risk of the fate of the Lascaux caves in France, where the paintings were beset by black mold.

A study by the Spanish National Resource Council in the 1990s found that the 1982 visitation schedule would hasten deterioration of the Spanish cave paintings by up to 78 times what would happen naturally. [The 7 Longest Caves in the World]

"If the cave reopens to the public, continued entry of visitors would cause increases in temperature, humidity and CO? [carbon dioxide] in Polychrome Hall, reactivating condensation and host-rock corrosion," the researchers wrote in Science. Polychrome Hall is a room in the cave featuring dozens of paintings of bison and deer. Animals were favorite subjects of Paleolithic cave painters.

Even the motion of visitors moving through the caves could prove disruptive, the researchers found, stirring the air and encouraging the release of mostly dormant bacterial and fungal spores. This could lead to new growth of microorganisms that currently seem to be slowing their advance.

The researchers have reported their recommendations to the Ministry of Culture, but the final decision is in political hands, said Cesareo Saiz-Jiminez, who co-authored the Science article. Saiz-Jiminez, a biologist and materials scientist for the Spanish Natural Research Council, told LiveScience that the researchers don't yet know which experts will be appointed to the decision-making panel.

In the meantime, Saiz-Jiminez said, the cave paintings are protected by double doors to keep particles and moisture out.

"All this should work," he said, "if, in addition, the cave remains closed to visits."