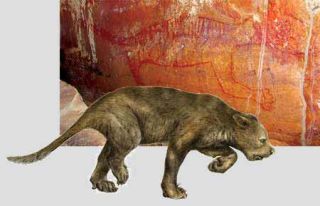 Modern Australia lacks big land predators, but until about 30,000 years ago, the continent was ruled by Thylacoleo carnifex, the marsupial "lion."

Several well-preserved skeletons of the leopard-size beast have been found. Now, a newly discovered cave painting offers a glimpse of the animal's external appearance. In June 2008, Tim Willing, a naturalist and tour guide, photographed an ancient painting on a rockshelter wall near the shore of northwestern Australia. Kim Akerman, an independent anthropologist based in Tasmania, says the painting unmistakably depicts a marsupial lion.

It shows the requisite catlike muzzle, large forelimbs, and heavily clawed front paws. And it portrays the animal with a striped back, a tufted tail, and pointed ears.

Those last three features aren't preserved in skeletons, but Aborigines would have known them well. Australia's first people landed on the continent at least 40,000 years ago and were contemporaries of the big predator. Previously known rock paintings hinted at marsupial lions, but were rudimentary and could have depicted the other striped marsupial predator, the dog-size Tasmanian "tiger." That species succumbed to competition from humans in 1936, much as the marsupial lion may have done millennia before.

The findings were detailed in Antiquity.