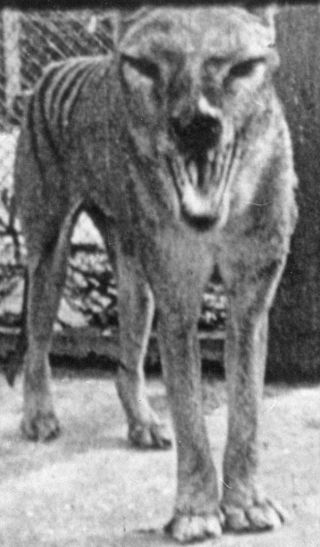 An image of one of the last Tasmanian tigers in captivity.
(Image: © Archives Office of Tasmania)

Wildlife scientists have re-opened the cryptic case of a carnivore that resembled a striped coyote and vanished from its Australian haunt nearly 80 years ago.

While the scientists think chances are slim that the so-called Tasmanian tiger (Thylacinus cynocephalus) still roams the island off the coast of Australia, they can’t help but turn over every possible leaf to look for evidence of the elusive animal.

The last wild Tasmanian tiger was killed between 1910 and 1920, and the last captive one died in 1936 at the Hobart Zoo in Tasmania, Australia. In 1986, the creature was declared extinct. The extinction marked the demise of the only member of its family, Thylacinidae, and the world’s largest marsupial (pouched) carnivore. It weighed about 65 pounds and had a nose-to-tail length of six feet.

However, rumored sightings of the creature continue to emerge from the island's ancient forests.

Now zoologist Jeremy Austin of the Australian Center for Ancient DNA and his colleagues are examining DNA from animal droppings found in Tasmania in the late 1950s and 1960s, which have been preserved in the Tasmanian Museum and Art Gallery.

Eric Guiler, a thylacine expert who found the scats, said he thought the droppings probably came from the Tasmanian tiger rather than a dog, Tasmanian devil or a quoll, according to Austin.

“If we find thylacine DNA from the 1950s scats it will be significant,” Austin said. “This would prove that either the thylacine produced the scat or a [Tasmanian] devil ate a thylacine and dropped the scat. Either way that is proof that the thylacine was there at the time.”

If they were to find evidence the Tasmanian tiger was alive between its last sightings in the wild (between 1910 and 1920), that would mean the beast was hidden from humans for 40 to 50 years.

“If they could survive this long with no real physical proof, then it does add a little more hope to the possibility that they could survive another 50 years without ever being caught, killed [or] hit by a car,” Austin told LiveScience. “This chance is of course not great, but the glimmer of hope is ever so slightly brighter.”