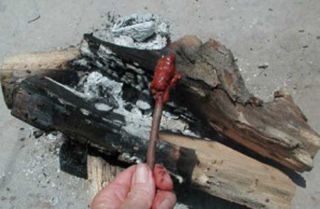 Modern parents, teenagers, and executives are all masters of multitasking, but people who lived 70,000 years ago may have shared that talent. Stone blades found in Sibudu Cave, near South Africa’s Indian Ocean coast, bear traces of compound adhesives that once joined them to wooden hafts to make spears or arrows.

Our distant ancestors discovered that mixtures of plant gum and red ocher or fat, heated carefully over a fire, made the superglue of their day, say Lyn Wadley and two colleagues at the University of the Witwatersrand in Johannesburg. So how is that evidence of multitasking?

By systematically replicating the ancient glues, using only Stone Age techniques and ingredients, the researchers discovered that ocher improves the bonding capacity of such natural adhesives as acacia gum. They also learned that those ingredients are highly variable in chemical composition and thus in key characteristics, such as viscosity, that affect the strength of the bond.

To make an effective glue, says Wadley, ancient artisans would have had to adjust their recipes in real time to compensate for unpredictable ingredients, staying mindful of their goal while shifting their focus back and forth among the various steps in the process.

Just when such modern cognitive abilities arose has been hard to pin down, but Wadley argues that glue making is the earliest evidence that sticks.

The findings were detailed in the Proceedings of the National Academy of Sciences.