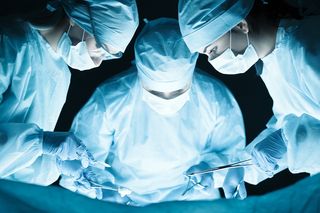 When you think about the risks of surgery, "fire" usually doesn't come to mind. But that's what happened to a man in Australia who experienced a "flash fire" in his chest cavity during emergency heart surgery, according to a new report of the case.

While fires during surgery are rare — and chest cavity fires even more unusual — the case "highlights the continued need for fire training and prevention strategies" during surgery, study lead author Dr. Ruth Shaylor, of the Department of Anaesthesia and Pain Medicine at Austin Health in Melbourne, Australia, said in a statement. In particular, doctors should be aware that certain circumstances during surgery — including the presence of high oxygen levels together with sources of heat — can increase the risk of fires.

In the new case, a 60-year-old man needed surgery to fix a life-threatening tear in his aortic artery — the main artery in the chest that carries blood out of the heart. The man had previously been diagnosed with chronic obstructive pulmonary disease (COPD), a chronic lung disease. [27 Oddest Medical Case Reports]

During the surgery, doctors noticed that the man's right lung was stuck to his sternum, or breastbone, and some lung tissue had become overinflated. These areas are known as "bullae," and are often caused by COPD.

Doctors tried to avoid the bullae as they opened the man's sternum to access his chest. But despite a careful effort, the surgeons punctured one of the bullae, causing air to leak out of the man's lung.

When this happened, doctors needed to give the man a higher dose of supplemental oxygen to prevent breathing problems. Later in the surgery, doctors used an electrocautery device, which heats tissue with electricity, to stop blood vessels from bleeding.

Suddenly, sparks from the electrocautery device ignited a fire on the surgical gauze. The fire was quickly extinguished with saline (salt water), without injury to the patient, Shaylor said. Despite the fire incident, the rest of the man's surgery went well, and doctors successfully repaired the aortic tear.

The man's case will be presented this week at the Euroanaesthesia Congress, the annual meeting of the European Society of Anaesthesiology in Vienna, Austria.

Although rare, fires during surgery can happen — indeed, about 600 surgical fires occur each year in the United States, according to the U.S. Food and Drug Administration.

There are three critical "ingredients" for a surgical fire: The first is the presence of an "oxidizer," including supplemental oxygen; the second is an ignition source, such as an electrocautery device; and the third is a fuel source, including surgical gauze, sponges or drapes, or even the patient's hair and skin, according to the FDA.

Most surgical fires happen when there are high oxygen concentrations in an environment — as was the case for this patient. The oxygen itself does not burn, but it lowers the temperature at which a fire can start. In other words, things that don't usually burn may ignite in the presence of high oxygen levels, the FDA says.

Chest cavity fires appear to be particularly rare, with only seven previous cases reported in the medical literature, the authors said.

All of these seven cases involved the presence of dry surgical materials (such as sponges or gauze); electrocautery devices and increased supplemental oxygen concentrations; and all of the patients had COPD or preexisting lung disease, Shaylor said.

"Surgeons and anaesthetists need to be aware that fires can occur in the chest cavity if a lung is damaged or there is an air leak for any reason, and that patients with COPD are at increased risk," Shaylor said.