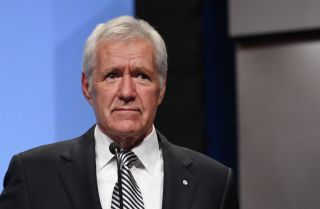 Alex Trebek was diagnosed with pancreatic cancer in March 2019. Above, Trebek speaking at the National Association of Broadcasters' Achievement in Broadcasting Dinner in April 2018.
(Image: © Ethan Miller/Getty Images)

Jeopardy! host Alex Trebek recently shared a promising update about his pancreatic cancer diagnosis — he's in "near remission," according to news reports. But what exactly does that mean?

Trebek, who was diagnosed with stage 4 pancreatic cancer in March, recently told People Magazine that he's been responding well to his chemotherapy treatment. "It's kind of mind-boggling," Trebek said. "Some of the tumors have already shrunk by more than 50%."

His doctors said "they hadn't seen this kind of positive result in their memory," Trebek added.

The fact that Trebek is responding so well to treatment is "great news," said Julie Fleshman, president and CEO of the Pancreatic Cancer Action Network (PanCAN), a charity and advocacy organization for pancreatic cancer, who isn't involved with Trebek's care. "You want to see that your tumor is shrinking" after treatment, Fleshman said. [10 Celebrities with Chronic Illnesses]

As for whether Trebek's response is unusual, Fleshman said "it's less common that you see a response as he's describing it." Still, "every patient is unique," Fleshman said. "There are definitely patients who respond very well to chemotherapy and experience a reduction in their tumor burden."

Pancreatic cancer is a particularly serious disease, with only 9% of patients surviving five years after their diagnosis, according to the American Cancer Society. But as somber as these statistics sound, doctors have been making progress in treating the disease — just a few years ago, the five-year survival rate was only 6%, Fleshman said.

In particular, there are now newer chemotherapy drug combinations that seem to show better effectiveness than those used in earlier years, Fleshman said. And by analyzing a patient's cancer at the molecular level, doctors may be able to provide more personalized treatments that align with patients' tumor biology, she said.

If a patient is doing well on a particular treatment, doctors may continue that treatment, Fleshman said. Trebek told People magazine that he will need to go through several more rounds of chemotherapy to hopefully reach remission.

Still, there is a possibility that a given treatment may stop working — for example, if the cancer becomes resistant to a particular chemotherapy. At that point, doctors may need to look into other treatment options, such as off-label drugs (those currently approved for other cancers, but not pancreatic cancer) or experimental treatments in clinical trials.

Even if a patient does reach remission, he or she will need to undergo regular scans and be prepared to start treatment again if the cancer does come back, Fleshman said.

Trebek's case has raised awareness about pancreatic cancer and "gives hope to so many people that there are options" for treating the disease, Fleshman said.