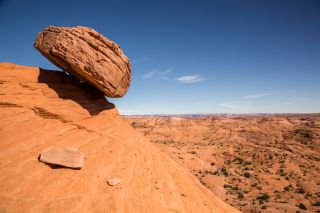 A large sandstone boulder rests precariously over a steep slope. The boulder has potential energy relative to the slope, as it appears to be ready to fall at any moment and slide hundreds of feet into the valley below.
(Image: © Shutterstock)

Potential energy is the latent energy in an object at rest, and is one of two forms of energy. The other form, kinetic energy, is the energy expressed by an object in motion. Potential energy is a core concept of any physics-based discussion, and one of the most influential variables in the formulas that describe our known universe.

Potential energy is essentially what it sounds like, though there are a few intricacies involved. The actual potential energy of an object depends on its position relative to other objects. For example, a brick has more potential energy suspended off of a two-story building than it does resting on the ground. That's because the brick's relative position to the Earth gives it more energy. Two bricks next to each other don't give each other more energy though, because there is no force acting on them.

The same principle can be applied on any scale, be it galactic or atomic. Indeed, atoms possess potential energy as well, though their constant movement shifts much of their potential energy into kinetic energy.

How to calculate potential energy

Energy refers to the ability of an object or system to perform work. It comes in many forms, including mechanical, thermal, chemical, nuclear and others. Work refers to the transfer of energy from one object to another, and has a close relationship with kinetic energy. Power is the rate at which energy transfers between two or more objects. These three concepts are closely related, and understanding each concept requires the context of the others.

Power is measured in watts, named for Scottish inventor James Watt. Wattage is a measurement of heat generation. Any time energy is transferred, heat is generated, and the faster it transfers, the more heat is created.

An easy way to visualize this interaction is with your hands. When you're cold, you might rub your hands together for heat. Now think of your hands vibrating together as fast as you can move them. More energy is used, which means more work is done. That work takes more power, which generates more heat.

The potential energy of any given object is a measurement of its potential to do work, create heat and generate power. For this reason, the calculation of an object's potential energy is the sum of its mass, distance from the Earth, electrical charge, distance from other objects, and internal elastic forces (that is, any internal mechanical force). Simplified, this formula can be written as: Potential Energy = mgh, where m is the mass, measured in kilograms; g is the acceleration due to gravity (9.8 m/s^2 at the surface of the Earth); and h is the height, measured in meters.