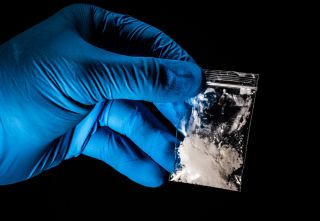 In April, the TV news program "60 Minutes" aired a report about fentanyl, a synthetic opioid much more potent than heroin that's been implicated in thousands of overdose deaths in the United States. During one segment, Justin Herdman, a U.S. Attorney in Cleveland, wore gloves as he showed journalist Scott Pelley seized bags of fentanyl and carfentanyl (also spelled carfentanil), an even stronger analogue of the drug, in their powder form.

"So if you touch this stuff, it could kill you?" Pelley asked. Herdman replied, yes.

"There's a reason we have a medic standing by, Scott, and that's because an overdose is — unfortunately it's something that we have to be prepared for, even dealing with it in an evidence bag," Herdman said. [How Does Anesthesia Work?]

Fentanyl is highly potent, but to experts in the medical community, the segment was a misguided claim about the danger of simply being in the same room the drug.

Dr. Ryan Marino, a toxicology fellow who specializes in emergency medicine at the University of Pittsburgh School of Medicine, recently started using the hashtag #WTFentanyl to call out such news stories that promote fentanyl myths.

"I just hope that people can use a little more critical thinking," Marino told Live Science.

Despite occasional news stories about police officers and other first responders experiencing ill effects or needing Narcan, an opioid antidote, after exposure to fentanyl, Marino said he doesn't know of any verified medical cases of a first responder testing positive for fentanyl through mere skin contact or being in the vicinity of the drug. And overdosing in such a scenario seems highly unlikely based on what researchers know about fentanyl and other opioids, he said.

In its guide for emergency responders, the American College of Medical Toxicology (ACMT) and American Academy of Clinical Toxicology (AACT) say that for opioid toxicity to occur, "the drug must enter the blood and brain from the environment." For this to happen, the drug would need to be absorbed by a mucous membrane (such as the nasal passages), inhaled, ingested or delivered by a syringe. Fentanyl can also enter a person's system therapeutically through dermal patches, but it takes several hours to absorb.

"[B]ased on our current understanding of the absorption of fentanyl and its analogs, it is very unlikely that small, unintentional skin exposures to tablets or powder would cause significant opioid toxicity, and if toxicity were to occur, it would not develop rapidly, allowing time for removal," the guide says.

Fentanyl also isn't volatile, meaning it doesn't readily vaporize or get into the air if undisturbed. In an extreme circumstance in 2002, when Russian authorities used an aerosol suspected to contain carfentanyl and remifentanil — a short-acting synthetic opioid — to subdue hostage-takers of a Moscow theater; more than 100 people were killed due to exposure to this gas. However, the AACT/AACT guide also notes, an "optimized airborne dispersal device is unlikely to be encountered in a local event."

In a December 2018 article in the health news publication STAT, medical toxicologists Drs. Lewis Nelson and Jeanmarie Perrone, noted that immediately following that 2002 incident, rescuers wearing limited or no protective equipment carried the victims from the theater, but weren't affected by the opiods. "Passive toxicity makes even less sense in conventional drug-use settings where other individuals are present and unaffected," Nelson and Perrone wrote.

Marino said he thinks myths about fentanyl risk are harmful in three ways. First, misguided fear over the drug may further stigmatize drug users, and prevent people who overdose from being resuscitated or getting the care they need. There is a genuine opioid crisis, with rising deaths among drug users being attributed to fentanyl; overdose is a time-sensitive condition, and delaying treatment can be fatal.

Second, first responders who start feeling ill at the scene of an overdose or a drug call might not be getting appropriate care and support. "I don't want to say that the symptoms that they're having aren't real," Marino said, but often "the symptoms do not match up" with overdose and it's possible that they're instead experiencing "nocebo" effects (the negative counterpart of the placebo effect) or panic attacks. (The symptoms of opioid toxicity are slowed breathing, decreased consciousness and very small pupils.)

Third, myths about illicit fentanyl might create unnecessary fear about the legitimate uses of the drug. Fentanyl is commonly administered in hospitals to alleviate extreme pain for people with broken bones, for example, Marino said. The drug is handled frequently by pharmacists, surgeons, nurses and anesthesiologists without the negative, passive side-effects that are being reported in these news stories.

In a guide that Marino made for first responders, he wrote that proper precautions, such as wearing gloves and washing any skin exposed to fentanyl with water (not with alcohol-based hand sanitizers, which could increase absorption) can help to protect them from exposure to the drug. If desired, wearing a N95 mask in situations where there is extreme air movement can also reduce the risk of exposure, he said.

Editor’s Note: This article was updated to include information about fentanyl transdermal patches.