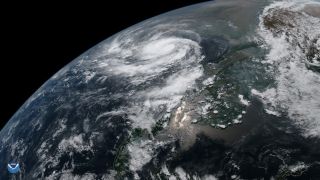 A massive cyclone is set to batter India over the next few days, spurring the biggest evacuation in the country's history.

The extremely severe cyclone, dubbed "Fani," is pummeling the Bay of Bengal and is projected to make landfall by Thursday night with approximately 120 mph (190 km/h) winds, with gusts up to 130 mph (210 km/h), according to the India Meteorological Department (IMD). Fani is also likely to bring "phenomenal" sea conditions in parts of the Bay of Bengal, according to the IMD.

More than 100 million people are in the path of the devastating cyclone, and nearly 900,000 people have been ordered to evacuate, the Associated Press reported. About 100,000 of those people are from the city of Puri, in the state of Odisha, which is home to the 858-year-old Jaganath Temple, the BBC reported. Officials fear that this ancient temple could be damaged by the cyclone.

Cyclone Fani will likely cause "total destruction" of thatched roof houses, as well as "extensive uprooting of communication and power poles," according to the IMD. India's air force, army, navy and coast guard are currently on high alert, and the country has opened 800 shelters for evacuees, the AP reported. The country also has more than 100,000 emergency food packets ready to be airdropped, according to the AP.