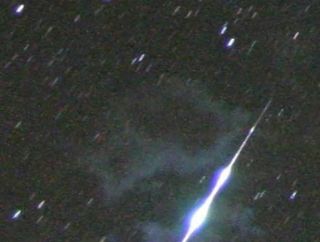 Mysterious booming sounds are occasionally heard on the North Carolina coast, often powerful enough to rattle windows and doors. They cannot be explained by thunderstorms or any manmade sources their source is a mystery.

Such dins are not unique to North Carolina or the modern age. People living near Seneca Lake in upstate New York have long known of similar booming sounds, which they called "Seneca guns." In coastal Belgium, they are known as "mistpouffers," or fog belches; in the Ganges delta and the Bay of Bengal, "Bansal guns;" in the Italian Apennines, "brontidi," or thunder-like; and by the Harami people of Shikoku, Japan, "yan."

"What's going on is an interesting challenge, whatever it might be," said seismologist David Hill, scientist emeritus at the U.S. Geological Survey office in Menlo Park, Calif.

"It seems there is quite a range of processes in nature that might be responsible," Hill told OurAmazingPlanet.

"Earwitnesses" described sounds like booming cannons or falling stones accompanying small to moderate earthquakes in England from 1880 to 1916. In 1975, U.S. Geological Survey researchers managed to record both acoustic and seismic signals of an earthquake swarm in California, finding that three earthquakes with magnitudes ranging from 2.0 to 2.8 produced sounds that began within 0.02 seconds of the arrival of seismic waves at the scientists' station. Similar results were seen with quakes in the French Pyrenees in 2004.

All in all, audible sounds from earthquakes might be perceived even when shaking is not, Hill suggested. For instance, while earthquakes are rare in coastal North Carolina, they are relatively common in the Charleston area of South Carolina, the site of the 1886 magnitude 7.6 Charleston quake, and the area that Seneca Lake is located within do host low-level earthquake activity. Locals could be hearing an earthquake that is too small for them to feel.

Also, rock bursts, where long-buried rock can suddenly release stress, often because of mining removing confining material above it, can essentially be seen as a type of small, near-surface earthquake. Scientists have reported feeling perceptible jolts and hearing sharp booming sounds from such bursts, Hill said.

Giant waves might also be responsible for the mystery sounds, Hill suggested. Scientists have found that booming sounds are apparently familiar to big-wave surfers during extreme waves. In addition, after the catastrophic 2004 magnitude 9.1 Sumatra earthquake and tsunami , multiple witnesses said they heard loud, offshore booming sounds closely accompanying two or three of the largest waves that struck the coast at any given site.

"I was surprised to learn about the possibility that tsunamis produce these kinds of sounds," Hill said. "I don't think anyone understands that process."

Hill suggests the sounds heard off the coasts of North Carolina, Belgium and the Bay of Bengal might be large waves caused by distant storms that break well offshore, beyond outer banks or barrier beaches. Such waves might also disrupt offshore methane hydrate deposits, leading to explosive venting of high-pressure gas trapped deep within the Earth.

Another possibility is meteors. Meteors can generate sonic booms and explode dramatically as they plummet from space. Given how long it can take a shockwave to reach the Earth's surface from the upper atmosphere, visible signs of the meteor can vanish before its sonic boom is heard, especially during the daytime, Hill noted.

Under the right circumstances, even sand dunes can generate a variety of sounds, including whispering, humming, whistling and squeaking. Booming sands, comparable to rumbling thunder, can be heard to distances of 6 miles (10 kilometers) and for as long as 15 minutes, are possible as well. They generally appear limited to large sand dunes in arid climates with steep faces pointing away from the wind, and seem to require loosely packed, very smooth, almost spherical sand grains.

"In the eastern desert in Egypt, the Bedouins have a long history of hearing booms and avoiding that area after installing seismometers there, researchers were able to go back and see these sounds seem correlated with small earthquakes that caused booming sands," Hill said.

In the future, after potential artificial sources of mysterious booming sounds are ruled out, such as military exercises and quarry blasts, seismic networks could quickly reveal if earthquakes or volcanoes were responsible. For instance, the USArray, a mobile network of seismometers, is currently moving east across the United States and "it might help resolve the issue of what the sounds on the North Carolina coast are," Hill said.

Hill detailed this research in the September-October issue of the journal Seismological Research Letters.

Editor's Note: This article was changed to reflect the correct location of Seneca Lake.