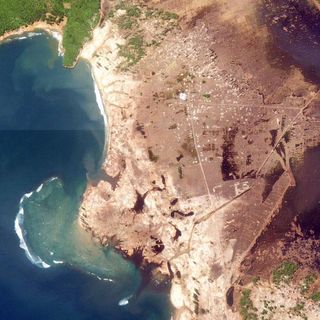 A thick plateau of strong rock along the seabed may have allowed the massive, magnitude 9.1 Sumatra earthquake to reach far closer to the Earth's surface, giving the deadly tsunami it triggered even greater power, according to new research.

In some cases those sediments are comparatively weak, and form slopes along the trenches on the seafloor where the plates meet. Yet along the Sumatra quake subduction zone, researchers discovered a flat sediment plain about 2.5 to 3 miles (4 to 5 kilometers) thick and 80 miles (130 km) wide, PlanetEarth Online reported.

Weaker sediments those with a consistency closer to taffy tend so slow the energy of an earthquake as it races from deep inside the earth toward the seabed. Yet if the sediments are strong more akin to peanut brittle the earthquake can displace larger portions of the seafloor, according to the PlanetEarth Online report.

It appears the plain near Sumatra is made of particularly strong sediments that allowed the quake's rupture to move quickly, thus reaching closer to the seafloor and displacing even more water than it might have otherwise, thus producing a particularly large tsunami.

The research is published online in the June 19 issue of the journal Nature Geoscience.

The 10 Biggest Earthquakes in History