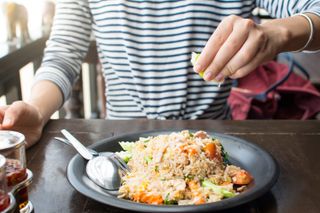 Bacillus cereus is a toxin-producing bacterium that causes food poisoning. Starchy foods, such as rice, are the most common types of food affected.
(Image: © Shutterstock)

Bacillus cereus is a toxin-producing bacteria that is one of the most common causes of food poisoning, also called "fried rice syndrome." An estimated 63,000 cases of food poisoning caused by B. cereus occur each year within the U.S., according to a 2019 article published in the journal Frontiers in Microbiology. However, the vast majority of cases go unreported, because the symptoms are generally mild and subside on their own with rest and hydration.

Leftover fried rice is a primary culprit, said Philip Tierno, a microbiologist and clinical professor at New York University Langone Health. After the rice is cooked, it is often left at room temperature for more than two hours to cool before frying it with other ingredients. Cooling the rice ensures that the finished fried rice won't get clumpy or become soggy. But reheating it doesn't get rid of the toxins the bacteria have already produced.

The bacteria release two types of toxins that each cause a different illness — one causes diarrhea while the other toxin elicits vomiting, according to the U.S. Food and Drug Administration (FDA) Bad Bug Book.

The first type of toxin is released in the small intestine after the bacteria are ingested, and causes diarrhea, cramps and occasionally nausea but rarely vomiting. Symptoms typically begin 6 to 15 hours after eating contaminated foods, which can include various meats, milk, vegetables or fish. The symptoms typically subside after about a day.

The second type of toxin is released by the bacteria in the food before it's consumed. Starchy foods, such as rice, are the most common sources of food affected. The toxin causes vomiting and nausea within 30 minutes to 6 hours after eating the contaminated food. Symptoms subside after about 24 hours. [Top 7 Germs in Food That Make You Sick]

Anyone is susceptible to illness caused by the bacteria. Doctors diagnose B. cereus food poisoning by testing the patient's vomit or feces for the bacteria, then matching the strains of bacteria within the samples to either a known contaminated food source or strains known to cause illness, according to a 2018 review article.

For most people who contract B. cereus, rest and keeping well-hydrated are enough to allow the body to rid the infection on its own, typically within a day. Complications, including aseptic meningitis, gangrene and cellulitis, typically occur only in people with compromised immune systems, those who have surgical wounds or people who use intravenous drugs.

If medical treatment is required, doctors focus on treating the symptoms, such as by administering intravenous fluids for dehydration. Occasionally, antibiotics such as vancomycin are prescribed for serious cases when the bacteria hangs out in the digestive tract for too long, said Tierno.

Keeping hot foods hot (above 140 degrees Fahrenheit, or 60 degrees Celsius) and cold foods cold (lower than 40 F, or 4 C) is vital for decreasing the risk of contracting a B. cereus illness, according to the U.S. Department of Health and Human Services. Reheating or freezing any foods that have been left out for more than 2 hours may not prevent illness.

Reheating foods to temperatures at or above 165 F (74 C) for 15 seconds will kill the cells but not the toxins, if they have already formed, according to 2017 article from the Institute of Food and Agricultural Sciences at the University of Florida. If any food is suspected of being contaminated, it should be thrown out.