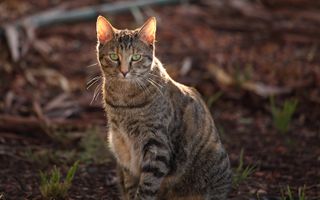 Performing sweeping culls of feral cats may be the only way to prevent the extinction of vulnerable Australian wildlife.
(Image: © Shutterstock)

It's raining poison sausages in Australia, in regions of the country that are home to thousands of feral cats.

Airplanes dropped the deadly bait over dozens of square miles of ground, as part of the Australian government's initiative to reduce populations of feral felines. These invasive predators kill hundreds of millions of native birds, mammals and reptiles each year and have already driven many species in Australia to extinction, The New York Times reported on April 25.

The poison payloads are packed with kangaroo meat and seasoned with spices and chicken fat, and they also contain one deadly ingredient: a poisonous chemical called sodium fluoroacetate, which occurs naturally in Australian plants in the Gastrolobium genus. This compound is lethal to cats and other nonnative carnivores but will not harm indigenous Australian species that have evolved resistance to the toxin, according to the Times. [Photos: See the World Through a Cat's Eyes]

Sodium fluoroacetate is an odorless, tasteless white powder that prevents cells from processing energy, leading to unconsciousness and death, according to Australia's Department of Sustainability, Environment, Water, Population and Communities (SEWPAC).

Another type of bait sausage being dropped in Australia contains a pellet of the toxic compound para-aminopropiophenone, which cats will swallow whole but smaller mammals will avoid, SEWPAC reported.

While cat lovers may be troubled at the prospect of felines being deliberately poisoned, Australia's out-of-control feral cat population has decimated the continent's wildlife for many decades.

Cats are an invasive species in Australia; they arrived with European settlers in the 1700s, and feral colonies were established in the wild by the 1850s, SEWPAC reported. Since then, 34 mammal species found only in Australia have vanished, and cats are thought to be directly responsible for 22 of those extinctions, the Times wrote.

Researchers determined in 2018 that feral cats in Australia kill an estimated 1 million reptiles on average in a single day. Tallies of annual death tolls racked up by Australia's feral cats are staggering: about 316 million birds and 596 million reptiles, according to the Australian Wildlife Conservancy.

Between 2 million and 6.3 million cats roam Australia, and they can be found on nearly 100% of the continent, including 80% of its islands. When the latest feral cat cull was announced, in 2017, Australia Threatened Species Commissioner Gregory Andrews named cats "the single biggest threat to our native animals," declaring that the cull was necessary to safeguard the future of vulnerable wildlife, according to The Sydney Morning Herald.

Approximately 211,000 cats were culled in Australia in 2016; the current cull will take place through 2020, with the goal of eradicating 2 million cats through poison bait, shooting and trapping, the Herald reported.