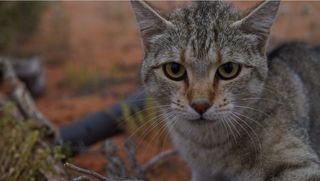 The cat's out of the bag — and all over Australia. A new study finds that feral cats inhabit 99.8 percent of the continent's landmass, including 80 percent of the land that makes up its islands.

Feral cats have long been recognized as a grave and widespread threat to vulnerable native wildlife — particularly in Australia, where species found nowhere else in the world are ill-equipped to deal with these invasive and deadly predators. But despite conservationists' efforts to track the felines' environmental impacts, the number of cats roaming Australia has remained elusive.

To put a number to the catastrophic invasion, 40 environmental researchers compiled data from nearly 100 relevant studies, finding that Australia hosts at least 2.1 million feral cats when prey is less abundant; when prey are plentiful, that number jumps to as many as 6.3 million. [Photos: See the World Through a Cat's Eyes]

European explorers first introduced cats to Australia in the 18th century. With no large predators and easy access to tasty small animals, the invasive felines swiftly adapted to the hospitable continent. Since then, feral cats have contributed to the extinction of close to 30 native mammal species — such as the big-eared hopping mouse, the Eastern hare-wallaby and the pig-footed bandicoot — and are instrumental in the current decline of many more, the study authors wrote.

"Australia is the only continent on Earth other than Antarctica where the animals evolved without cats, which is a reason our wildlife is so vulnerable to them," Gregory Andrews, Australia's Threatened Species Commissioner, said in a statement.

Prior approximations of feral cat populations by Australia's Department of the Environment, Water, Heritage and the Arts suggested there could be as many as 18 million cats roaming the country. However, that number was a far-from-certain estimate, the researchers said. Also, it didn't include information about population densities and variations based on seasonal changes or environmental factors to help conservationists design focused strategies for getting rid of the invasive pests.

In the study, researchers created more accurate estimates by dividing Australia's landmass — islands included — into a grid, with each cell measuring 0.6 mile by 0.6 mile (1 kilometer by 1 kilometer). Using data from existing studies on feral cat numbers in locations across the continent, they predicted cat population size for each grid cell and then calculated the population sum across all cells, factoring in variations in population size based on food availability.

"Australia's total feral cat population fluctuates between 2.1 million when times are lean, up to 6.3 million when widespread rain results in plenty of available prey," study co-author Sarah Legge, a principal research fellow with the School of Biological Sciences at the University of Queensland, said in a statement.

Legge and her colleagues discovered that population density varied widely across the country, with as many as 100 cats in 0.4 square mile (1 square kilometer) in some spots. Densities in urbanized areas could be 30 times greater than in natural environments. They also found that cat population density was higher on islands — and the smaller the island, the more feral cats there were likely to be.

By revealing where feral cats tend to congregate, the scientists' results could help conservationists develop strategies to address the locations most at risk.

"Our study highlights the scale and impacts of feral cats and the urgent need to develop effective control methods, and to target our efforts in areas where that control will produce the biggest gains," Legge said.

The findings were published online Dec. 20 in the journal Biological Conservation.