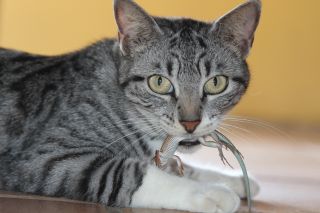 Outdoor cats are feasting on the reptiles of Australia, and conservationists are concerned about the toll their snacking habits might take on the country's biodiversity.

Feral cats kill, on average, 1 million reptiles each day in Australia, according to a new study published today (June 25) in the journal Wildlife Research.

Feral cats (Felis catus) are those animals that used to be (or their ancestors used to be) domesticated, but who now roam in the wild. In the 18th century, the Europeans who came to Australia introduced these furry felines to the continent, bringing them along as pets, according to the study. But 230 years later, the descendants of those cats — totaling more than 2 million — are now menacing populations of lizards, turtles and snakes. [Here, Kitty, Kitty: 10 Facts for Cat Lovers]

To figure out the toll cats took on Australian reptiles, the researchers looked at more than 80 studies that included, in total, analyses of more than 10,000 samples of cat poop or stomach samples. They found that the feral cats in the studies eat 258 different kinds of Australian reptiles, including 11 threatened species such as the Christmas Island forest skink (Emoia nativitatis), the pygmy copperhead snake (Austrelaps labialis) and some turtles. They also found that the cats hunted reptiles much more in areas that were hotter and drier.

However, the actual number is likely higher. That's because many reptiles are local to specific areas of Australia, and the researchers weren't able to sample every region of the country. Rainforests, for example, were largely unsampled, they wrote.

"Such intensive predation probably puts severe pressure on local populations of some reptile species," the authors wrote for The Conversation. "There is now substantial evidence that cats are a primary cause of the ongoing decline of some threatened Australian reptile species, such as the great desert skink."

"Our research provides yet more evidence of the harm that cats are wreaking on Australia’s native wildlife," they wrote for The Conversation. (Last year, the same authors reported in the journal Biological Conservation that feral cats eat around 272 million birds a year in Australia.)

"It underlines the need for more effective and strategic control of Australia’s feral cats, and for more responsible ownership of pet cats," they wrote.