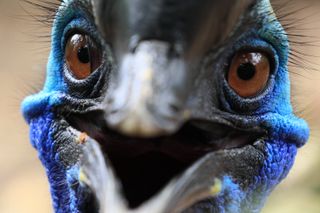 Florida-resident Marvin Hajos died two weeks ago, after being attacked by one of his cassowaries — a giant, flightless bird with sharp claws native to Australia and Southeast Asia.

This Saturday (April 27), as per the owner's wish, the cassowary that killed 75-year-old Hajos will be put up for auction, along with about 100 other exotic animals that Hajos kept on his estate in Florida, according to The New York Times. Anyone can attend the auction, except the press, according to the organizers, Gulf Coast Livestock Auction.

In fact, anyone who tries to video-record the auction will be escorted out and their recordings will be destroyed, the organizers wrote in a Facebook post. The secrecy, it seems, comes from Hajos' family's wishes not to release information to the media, according to the Times. [Top 10 Deadliest Animals]

When rescue workers found Hajos, his body was lying between two cassowary pens. Bill Grotjahn, an investigator from the medical examiner's office, told the Times he heard Hajos may have gone to the pens to check on the cassowary’s eggs — and the female cassowary could have attacked to protect them.

These giant birds can reach up to 6.5 feet (2 meters) tall and weigh up to 130 lbs. (59 kilograms). And though they have long claws and a violent reputation, it’s very rare for them to kill humans, according to the Times.

Some of the other animals up for auction include macaws, marmosets, lemurs, tortoises and a kookaburras bird.