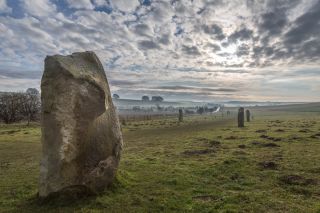 The massive and ancient stone circles around Stonehenge and Avebury in southern England may have all started with the commemoration of a single Neolithic house that probably belonged to an elite family, archaeologists now say.

Using ground-penetrating radar, the researchers found that the monumental stone circles of Avebury, about 25 miles (40 kilometers) north of Stonehenge, were centered on an early Neolithic habitation, with the concentric stone circles and large earthen embankment being built around it probably centuries later.

They say the Neolithic house at Avebury was built sometime after 3700 B.C. — but centuries before the creation of the larger rings of stone at Avebury and the megalithic monument at Stonehenge, which research shows were built after 3000 B.C. [In Photos: A Walk Through Stonehenge]

One of the researchers, Josh Pollard, a University of Southampton archaeology professor, said the original house at Avebury could have been one of the first significant Neolithic structures in the area, including Stonehenge.

"The house would come very early in the Neolithic [period], probably at a time just before people were starting to build big monuments," Pollard told Live Science. "So it would be probably a kind of foundational structure."

Avebury is one of the largest Neolithic monuments ever found. It consists of at least two stone circles enclosed within a larger stone circle, a ditch and earthen banks, which span more than 1,100 feet (340 meters) across in some places. The remains of circular timber enclosures have also been found nearby.

The new research is published today (April 10) in the journal Antiquity.

The researchers found that the southernmost of the two stone circles enclosed by the earthworks at Avebury was originally centered on a single Neolithic house about 25 feet (8 m) across.

Pollard said the house had probably fallen down by the time it was first enclosed by a square of stones, and later by the larger rings of standing stones and earthworks. Over centuries, the site grew larger and it was connected by stone-lined avenues to other Neolithic stone monuments in the area, he said.

Although traces of the Neolithic house were seen during excavations at Avebury in 1939, the remnants were written off at the time as of medieval origin. But the latest research revealed the remains match the shape of early Neolithic houses found elsewhere in the British Isles, and pieces of early Neolithic pottery and flint tools were also found within and around the house.

Pollard said the researchers could only speculate on the people who lived in the ancient house.

"For the most part, people were not living in nice, solid wooden structures of this kind," he said. "So people who inhabited these buildings were perhaps of a more senior social status, [perhaps] of a more important lineage than the rest of the population.

"And this is why we think that the house then became the focus [of Avebury] … that it likely relates to the dwelling of people who were regarded as being part of an important foundational Neolithic lineage," Pollard said.

The lead author of the new research, Mark Gillings, a University of Leicester archaeology professor, said researchers would examine the northernmost of the two smaller stone circles at Avebury to see if another Neolithic structure — perhaps another house or a grave, for example — had been commemorated there.

"We should be able to see an echo of any house in terms of artifact densities in the surrounding soil, and if this house was also monumentalized by an enclosing square megalithic setting, we should see that too," Gillings told Live Science.