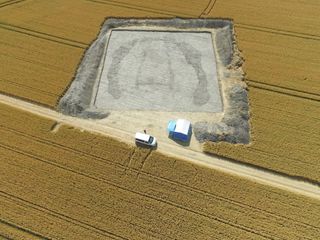 An ancient house of the dead has been unearthed near Stonehenge.

The Neolithic burial chamber, which likely dates to approximately 5,600 to 5,700 years ago, would have been an earthen structure that housed the skeletons of some of the earliest inhabitants of Britain. The burial structure, known as a long barrow, was discovered in the Salisbury Plain in Wiltshire, England, which is dotted with ancient ruins from this period.

"It's a very rare type of monument, and a monument type we do not get to excavate very often," said Jim Leary, director of the Archaeology Field School at the University of Reading in England, who is leading the excavations. "This is the first one in 50 years that's been excavated in Wiltshire in its entirety."

The burial chamber was discovered in what looked like an ordinary wheat field, thanks to aerial footage that revealed the outline of some structure lying hidden below. The excavations have just begun, so the scientists have yet to send their findings to peer-reviewed journals; the archaeologists don't yet know whether they will uncover skeletons or other artifacts in the long barrow, Leary said. [Aerial Photos Reveal Mysterious Stone Structures]

The Salisbury Plain in England is home to a stunning array of ancient monuments, from Stonehenge, to the mysterious fire monument near Avebury Circle, to the chalk mound known as Silbury Hill. It's not clear why so many of these ancient monuments have been found in the region, though one likely reason is that it has been very sparsely occupied in recent human history, meaning these monuments have not been plowed over through the millennia by farmers, Leary said. However, the river valleys of the Avon and Kennet rivers (which flow through Wiltshire) do seem to have had some special sacred significance for ancient people, which may mean more monumental architecture was constructed there, he said.

Among the finds in this historic region are long barrows, or places where people buried some of their dead in ancient times. In the early Neolithic period, the bodies of a few select people were left on giant platforms for birds to pick clean. Once devoid of any tissue, the skeletons were placed in long, typically rectangular structures that looked like houses, only they were covered over by soil, Leary said.

Such long barrows date to an interesting period in the history of this region, when a hunter-gathering lifestyle gave way to permanent settlements supported by domesticated animal husbandry and farming, the researchers noted.

The newfound long barrow was discovered via aerial photography, which revealed crop marks in the field. When the researchers investigated the physical properties of the ground, they suspected that there might be an undiscovered monument beneath.

The early excavations revealed the remains of a large, long barrow, about 85 feet (26 meters) long and about 65 feet (20 m) wide, Leary said. The structures that would have stood aboveground have been plowed under through the millennia, so the only features that remain are those that were dug deep into the ground, he added.

Though the team hasn't dated any of the material at the site yet, long barrows with similar features, such as the West Kennet long barrow, date to around 3500 B.C. to 3700 B.C.

If this burial chamber is similar to others found in the region, the barrow may have once contained 30 to 50 skeletons, which may have been buried with cow skulls.

"These are the very first people to have domestic cows, and they seem quite an important species to them," Leary told Live Science.

Though the burial site predates Stonehenge by several centuries, it's possible that distant relatives of the builders of Stonehenge, or at least relatives of the people who occupied the area around the sacred monument, could, theoretically, be housed there, Leary said.