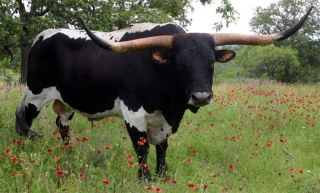 The first cows brought to the Americas by explorer Christopher Columbus originated from two extinct wild beasts from India and Europe, a new genetic analysis shows.

Because the breeds analyzed, including the longhorn, have been closely connected to humans, the results could shed light on human migration over the past 10,000 years, said study co-author Emily Jane McTavish, an evolutionary biology doctoral candidate at the University of Texas at Austin, whose mascot is the longhorn cow.

The findings were published today (March 25) in the journal Proceedings of the National Academy of Sciences.

About 10,000 years ago, ancient people domesticated cows from wild aurochs (bovines that are 1.5 to two times as big as domestic cattle) in two separate events, one in the Indian subcontinent and one in Europe.

Paleolithic people probably captured young aurochs and selected for the most docile of the creatures. The "fierce and scary" creatures gradually became tamer, domesticated animals, McTavish said. Wild aurochs survived until 1627, when hunting and habitat loss drove the creatures to extinction.

On Columbus' second trip to the Americas in 1493, he brought cattle.

To untangle the history of these New World breeds, McTavish and her colleagues analyzed the genetic lineage of three cattle descended from the New World cows: Texas longhorn, Mexican Corriente and Romosinuano cattle from Colombia, and compared them with 55 other cattle breeds. [5 Misconceptions of Christopher Columbus]

The researchers found that the New World cows evolved from both Indian and European lineages. In addition, historical records suggest that Longhorns underwent natural selection while they were living in semiwild herds for 450 years, or about 80 to 200 generations.

The group hypothesizes that Indian cows made it to East Africa via trade routes, and cows from North Africa may have entered Spain when the Moors conquered the Iberian Peninsula.

The findings suggest that New World cows differ from breeds brought by the French and the British, such as Angus and Hereford, which evolved only in Europe, McTavish said.

"All these European breeds have a different evolutionary history than the Spanish breeds brought by Columbus," McTavish said.

Because New World cows were adapted to frequent droughts and changing food supplies, "these traits could be useful to breeders developing hardier breeds of cattle, especially in the face of climate change," McTavish said.