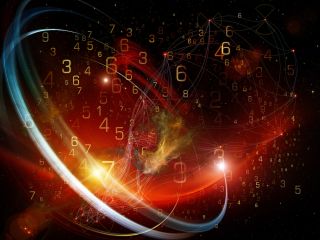 A mathematician in England has cracked a math puzzle that's stumped computers and humans alike for 64 years: How can the number 33 be expressed as the sum of three cubed numbers?

While it might seem simple on its face, this question is part of an enduring number-theory conundrum that goes back to at least 1955 and may have been mulled over by Greek thinkers as early as the third century. The underlying equation to solve looks like this:

This is an example of a Diophantine equation, named for the ancient mathematician Diophantus of Alexandria, who proposed a string of similar equations with multiple unknown variables about 1,800 years ago. If you want to play along, pick any whole number between 1 and infinity — that's your k value. Now, the challenge is to find the values for x, y and z that, when cubed and summed, equal k. The mystery numbers can be either positive or negative, and as big or as small as you want. [5 Seriously Mind-Boggling Math Facts]

Andrew Booker, a mathematics professor at the University of Bristol, recently knocked one of those stubborn numbers off the list.

Booker created a computer algorithm to look for solutions to x^3 + y^3 + z^3 = k, using values up to 10^16th power (that's every number up to 99 quadrillion). Booker was looking for new solutions to all the valid numbers below 100. He didn't expect to find the first-ever solution for 33 — but, within several weeks of computing, an answer turned up. That answer is:

"I did a jump for joy [when I found it]," Booker said in a video for the YouTube channel Numberphile. (His wife, on the other hand, "wondered why she should care," he added.)

That leaves only one stubborn number below 100 left to crack: 42. Thanks to Booker's work, mathematicians now know that the solution must involve numbers greater than 99 quadrillion.

Stepping up the calculations could take a while using modern computing power. But this state of affairs should come as no surprise to fans of Douglas Adams' "The Hitchhiker's Guide to the Galaxy" book series, which says that the number 42 is actually the answer to the ultimate question of life, the universe and everything. In Adams' books, it took a supercomputer 7.5 million years of processing time to come up with this answer — only to realize that nobody knew what question it was meant to answer in the first place. Perhaps Diophantus knew all along