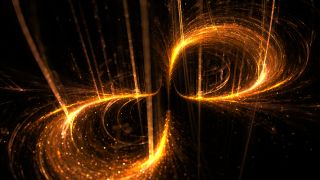 So. Many. Numbers.
(Image: © Shutterstock)

"To infinity and beyond!"

Have you even thought deeply about Buzz Lightyear's famous catchphrase from the "Toy Story" movies? Probably not. But maybe you've sometimes looked up at the night sky and wondered about the nature of infinity itself.

Infinity is a weird concept, one that the human brain has a hard time wrapping its limited understanding around. We say that the universe might be infinite, but can it really just go on forever? Or the digits of pi after the decimal — do they actually run on endlessly, always giving us that much more precision about the ratio between a circle's circumference and radius? And, could Buzz be right? Is there something beyond infinity?

In order to tackle these mind-bending speculations, Live Science enlisted the help of mathematician Henry Towsner from the University of Pennsylvania in Philadelphia, who was kind enough to try answering the question, "Can you count past infinity?" (Be forewarned: this is going to get tricky.)

Infinity, Towsner said, sits at a strange place: Most people feel like they have some intuition about the concept, but the more they think about it, the weirder it gets.

Mathematicians, on the other hand, don't often think of infinity as a concept on its own, he added. Rather, they employ different ways to think about it in order to get at its many aspects.

For instance, there are different sizes of infinity. This was proven by German mathematician Georg Cantor in the late 1800s, according to a history from the University of St Andrews in Scotland.

Cantor knew that the natural numbers — that is, whole, positive numbers like 1, 4, 27, 56 and 15,687 — go on forever. They are infinite, and they are also what we use to count things, so he defined them as being "countably infinite," according to a helpful site on history, math and other topics from educational cartoonist Charles Fisher Cooper.

Groups of countably infinite numbers have some interesting properties. For instance, the even numbers (2, 4, 6, etc.) are also countably infinite. And while there's technically half as many of them as what's encompassed by the full set of natural numbers, they're still the same kind of infinite.

In other words, you can place all the even numbers and all the natural numbers side by side in two columns and both columns will go to infinity, but they are the same "length" of infinity. That means that half of countable infinity is still infinity.

But Cantor's great insight was to realize that there were other sets of numbers that were uncountably infinite. The real numbers — which include the natural numbers as well as fractions and irrational numbers like pi — are more infinite than the natural numbers. (If you'd like to know how Cantor did it and can deal with some mathematical notation, you can check out this worksheet from the University of Maine.)

In order to get at the issue, Towsner talked about the ordinal numbers. Unlike cardinal numbers (1, 2, 3 and so on), which tell you how many things are in a set, ordinals are defined by their positions (first, second, third, etc.), and they were also introduced into mathematics by Cantor, according to the math website Wolfram MathWorld.

In the ordinal numbers is a concept called omega, denoted by the Greek letter ω, Towsner said. The symbol ω is defined as the thing that comes after all the other natural numbers — or, as Cantor called it, the first transfinite ordinal.

But one of the things about numbers is that you can always add another one at the end, said Towsner. So there is such a thing as ω+1, and ω+2 and even ω+ω. (In case you're wondering, you eventually hit a number called ω1, which is known as the first uncountable ordinal.)

And since counting is kind of like adding additional numbers, these concepts in a way allow you to count past infinity, Towsner said.

The strangeness of all this is part of the reason mathematicians insist on rigorously defining their terms, he added. Unless everything is in order, it's difficult to separate our normal human intuition from what can be proven mathematically.

"The math is telling you, 'Introspect deeply, what is counting?''' Towsner said.

For us mere mortals, these ideas might be tough to fully compute. How exactly do working mathematicians deal with all of this funny business in their day-to-day research?

"A lot of it is practice," Towsner said. "You develop new intuitions with exposure, and when intuition fails, you can say, 'We're talking about this exact step-by-step rigorous proof.' So if this proof is surprising, we can still check that it's correct, and then learn to develop a new intuition around that."