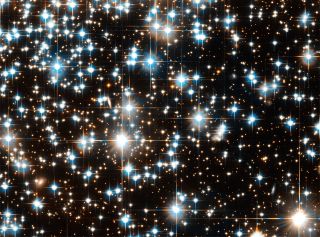 The globular cluster NGC 6397 (seen in this Hubble Space Telescope image), located about 7,200 light-years away, is estimated to be 13.5 billion years old; that makes the cluster among the first objects of the galaxy to form after the Big Bang.
(Image: © NASA, ESA, and H. Richer (University of British Columbia))

Scientists now know the universe is expanding, at an ever-increasing rate. So if it's ballooning, what is it growing into? In other words, what is beyond the known universe?

Defining this "beyond the universe" would imply that the universe has an edge. And that's where things get tricky, because scientists aren't certain if such a drop-off exists.

The answer depends on how one views the question.

One form of the question asks, "Could you go somewhere that you could look 'beyond' the universe," the way one might peer beyond a cliff edge or look out a window to see the outside of a building? The answer to that query is "probably not."

The cosmological principle is, in part, a consequence of the idea that the laws of physics are the same everywhere. "There's lots of local variation — stars, galaxies, clusters, etc. — but averaged over big chunks of space, no place is really that different than anywhere else," McNees told Live Science in an email

The implication though, is that there is no "edge"; there is no place to go where the universe just ends and one could look in some direction and see what's beyond it.

One analogy often used to describe this edgeless universe is the surface of a balloon. An ant on such a surface can walk in any direction and it would look like the surface was "unbounded" — that is, the ant might come back to where it started but there would be no end to the journey. So even though the surface of a balloon is a finite number of square units, there's no edge to it, no boundary (since you can go forever in any one direction). In addition, there's no "center," so there's no preferred point on the balloon's spherical surface.

The universe is a three-dimensional version of the balloon's skin.

But how can the universe be expanding if there is no end or edge to it?

Using the balloon analogy again, if one were to add more air to the balloon, the ant would observe other things on the balloon's surface getting farther away. And the greater the distance between the ant and some object, the faster that object would be receding. But no matter where the ant skittered, the speed at which those objects were receding would follow the same relations — if the ant came up with an equation describing how fast the farthest objects were receding, it would work the same way anywhere on the balloon's surface.

However, balloons, when blown up, are expanding into a three-dimensional space. The problem is that this doesn't apply to the universe. By definition, the universe contains everything, so there is no "outside." Physicist Stephen Hawking has often said that the whole question makes no sense, because if the universe came from nothing and brought everything into existence, then asking what lies beyond the universe is like asking what is north of the North Pole. [The Big Bang to Civilization: 10 Amazing Origin Events]

Dr. Katie Mack, a theoretical astrophysicist at the University of Melbourne in Australia, told Live Science that it might be more useful to think of the universe as getting less dense, rather than expanding. That is, the concentration of matter in the universe is decreasing as the universe expands, she said.

That's because galaxies aren't moving away from each other through space — it's space itself that is getting bigger. So any aliens in the galaxies that humans see would all come to the same conclusion that Earthlings do: Everything else is moving away in all directions, and the local galaxy is at rest.

Because space is expanding, it's possible for the galaxies to appear as if they are moving faster than light, without violating relativity — which says that nothing can go faster than light in a vacuum. The actual size of the observable universe is 46 billion light-years in any direction, even though the universe began only 13.8 billion years ago, Mack said. But that still sets a limit on the size of the universe humans can see, called the observable universe. Anything outside of that radius of 46 billion light-years is not visible to Earthlings, and it never will be. That's because the distances between objects in the universe keep getting bigger at a rate that's faster than the light beams can get to Earth.

And on top of that, the rate of expansion has not been uniform. For a brief fraction of a second after the Big Bang, there was a period of accelerated expansion called inflation, during which the universe grew at a much faster pace than it is growing now. Whole regions of space will never be observable from Earth for that reason. Mack noted that assuming inflation happened, the universe is actually 1023 times bigger than the 46 billion light-years humans can see. So if there is an edge to the universe, it's so far away Earthlings can't see it, and never will. [Big Bang, Deflated? Universe May Have Had No Beginning]

An additional factor is whether the universe popped into existence out of nothing at all, via small fluctuations in a vacuum, or, as Hawking and James Hartle proposed, time and space become interchangeable close to the beginning. If either one is the case, then asking what came before the universe and what is outside of it makes no sense.

Mack said there are ongoing attempts to resolve the question of whether the universe is like a sphere, curving back on itself so that if you travel in one direction you eventually return to your starting point.

"We look for repeated spots in the sky," she said. "That's what people look for when seeking evidence for the universe being finite. … Our space could be a 3D space embedded in a four-dimensional space." (The universe has four dimensions that humans interact with, three of space and one of time, but this would imply there is an additional, fourth spatial dimension.)

If astronomers found two places on opposite sides of the sky that were exactly the same, that would be a strong indication that the universe is curved in that way. There are no guarantees, though. While some cosmological theories such as string theory posit higher dimensions, most of those would be "rolled up" and small, whereas a curved universe's "extra" space dimension would have to be large.

All of this means that if there's an end to the universe, humans might well never be able to see it, and there is the real possibility that the universe is shaped so that it can't have a boundary to begin with.