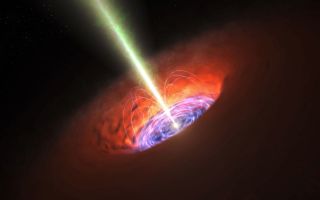 There's a catch, of course. These 5D "black rings" don't exist, as far as anyone can tell. Instead, the new theoretical model may point out one reason why we live in a four-dimensional universe: Any other option could be a hot mess.

"Here we may have a first glimpse that four space-time dimensions is a very, very good choice, because otherwise, something pretty bad happens in the universe," said Ulrich Sperhake, a theoretical physicist at the University of Cambridge in England. [8 Ways You Can See Einstein's Theory of Relativity in Real Life]

Doomed from the start

From the beginning, Einstein's theory of general relativity, which describes how matter warps space-time, predicted its own demise. That demise came in the form of singularities, or infinitely curved portions of space-time in which the laws of physics break down, said study co-author Markus Kunesch, an applied mathematics and theoretical physics doctoral candidate at the University of Cambridge.

But in a kind of lucky save, Einstein's theory predicts these singularities exist only behind the event horizons of black holes, from which no matter can escape.

"Even though you have a singularity, it's pretty nicely contained in a high-security lunatic asylum, and it cannot affect anything on the outside," Sperhake, who was not involved in the current study, told Live Science. "This means that general relativity is still perfectly able to explain the entire evolution of the entire universe outside this tiny singularity."

The notion of safely contained singularities, dubbed the cosmic censorship theorem, has held up everywhere in the universe where people have looked.

But Kunesch and fellow University of Cambridge researchers Pau Figueras and Saran Tunyasuvunakool wanted to probe the limits of the cosmic censorship theorem. They took a look at bizarre proposed black holes that researchers had dreamed up about 15 years ago.

In the past, researchers had proposed a mathematical description of these black rings. However, no one had been able to simulate how they would behave under general relativity. It turned out that, in five dimensions, "naked singularities" would be sitting outside black holes, the team reported in a study published Feb. 18 in the journal Physical Review Letters. That, in turn, would imply that Einstein's theory of relativity would completely break down throughout the universe, not just in black holes.

That doesn't mean Einstein's theory is wrong. Relativity has passed every single test it's faced.

"It is an incredibly amazing theory. It has predicted a lot of new things," Kunesch told Live Science. (Physicists recently discovered one of the last remaining predictions of relativity when they detected gravitational waves formed from the smashup of two black holes 1.3 billion years ago.)

For one, it's extremely unlikely that these relativity-breaking black holes exist. For that to be true, there would have to be extra dimensions. While some theories, such as string theory, do predict the existence of 11 or even 27 extra dimensions, these higher dimensions would be teensy, rolled-up specks — far different from the vanilla, ordinary-size dimensions that we live in, and that black rings were conceived in, Sperhake said. [5 Reasons We May Live in a Multiverse]

The Goldilocks of universes

The findings add to the notion that the universe occupies a sweet spot in terms of its physical properties, Sperhake said. If the gravity had been stronger, our universe would have collapsed soon after the Big Bang. If the gravity had been weaker, no stars could have formed. If the electromagnetism had been slightly different, the chemistry would have gone wonky, Sperhake said. Now, it seems as if the number of dimensions of space-time should be added to the list: If there were any more, the future behavior of the universe couldn't be predicted, at least not by Einstein's theory, he said.

The new results also shine a light in some of the dark, unexplored nooks and crannies of Einstein's groundbreaking theory, Kunesch said.

"It's quite remarkable that, more than 100 years after Einstein's theory was written down, we still don't fully understand what solutions to Einstein's equations look like," Kunesch said. "We still need to establish whether it is completely consistent theoretically. There are still lots of open questions, both on the theoretical level but also on the more experimental level."