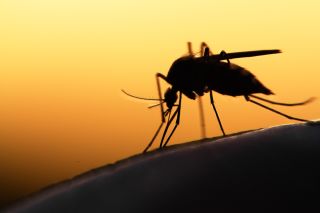 In a blow to dubstep fans everywhere, a team of insect researchers has found that female mosquitoes listening to Skrillex had less sex and sucked less blood than mosquitoes who spent 10 minutes in silence.

The authors of the new study, published March 25 in the journal Acta Tropica, wanted to test whether loud music could be used to manipulate mosquito behavior as an "environmentally friendly" alternative to insecticides. Because mating and blood-sucking are the main means by which mosquitoes transmit deadly diseases like Zika virus and dengue fever, interrupting those behaviors with obnoxious noise could also mitigate the spread of disease, the authors wrote.

In their study, the researchers tested their hypothesis by blasting electronic music from a speaker set up near a cage of hungry female mosquitoes who had gone 12 hours without a meal. The cage also contained one virgin male mosquito (for sex) and a restrained hamster (for lunch). In a series of 10-minute trials, groups of 10 female mosquitoes were continuously swapped into the cage while the Skrillex song "Scary Monsters and Nice Sprites" played on repeat. The researchers chose this song because its excessive loudness and constantly escalating pitch made it a prime candidate for "noisiness," the team wrote. [Googly Eyes: Photos of Striking Wasp Faces]

When the team compared the mating and feeding behaviors of the Skrillex mosquitoes to those of a control group, whose cage was silent, they found that the noise-addled bugs had significantly less sex and sucked less blood than their quiet-space counterparts.

Despite having gone 12 hours since their last feeding, the mosquitoes in the musical group were so distracted by Skrillex's barrage of vibrations that most did not start looking for food until an average of 2 or 3 minutes of the song had elapsed. Nonmusical mosquitoes, meanwhile, homed in on the hamster after an average of 30 seconds. Once they finally found the prey, Skrillex mosquitoes also made fewer attempts to suck blood than control mosquitoes did.

Skrillex mosquitoes also had about five times less sex than mosquitoes flying in silence. The researchers said the music's aggressive vibrations may have confused mosquitoes who were trying to synchronize their wing beats — an insect equivalent of swiping right.

"Both males and females produce sounds through the beating of their wings," the authors wrote. "For successful mating to occur, the male must harmonize its flight tone with that of its partner using auditory sensitivity."

The results of this study harmonize well with previous research that has linked human-made noise to the disruption of insect behavior. Similar studies have found that leaf-eating insects get distracted from their meals when exposed to the pulses and chirps of an audio oscillator and that beetles who listen to AC/DC's rock classic "Back in Black" eat fewer aphids than beetles who forage in silence. ("In some contexts," those researchers concluded, "rock and roll is noise pollution.")