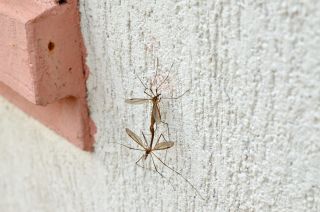 Sometimes they're mere pests, other times they're dangerous vectors of diseases, such as malaria and the Zika virus. Whatever the case, the lives of both male and female mosquitoes revolve around mating, so just how do the buzzing insects do it?

Across the globe there are more than 3,000 species of mosquitoes. These bite-sized animals live very short lives — with males sometimes living for only about a week and females for up to about 100 days — and employ a range of strategies to get down to business.

In tropical regions of the world, the insects breed year-round, while those in temperate areas breed according to specific seasons. Given their short life spans, "mosquitoes have what we call overlapping generations," said mosquito expert Laura Harrington, an entomologist at Cornell University. "Mating can happen throughout the season but with different age cohorts."

In many species, male mosquitoes are ready to mate within their first few days of adulthood. Females, on the other hand, are generally ready to mate almost immediately after leaving their pupal casings (a pupa is an immature stage of life between larva and adult).

In one genus called Opifex, males take advantage of this rapid female maturity. "The male will actually emerge from the pupal stage and grab the trumpet or breathing tube of the female and then mate with her," Harrington told Live Science, remarking on the fact that males are able to somehow tell which pupa are female and which are male.

In other species, a male will instead zero in on a human host using carbon dioxide cues, where he waits — buzzing around in figure-eight patterns — to intercept a blood-sucking female seeking a meal (males only drink nectar).

Many other species take a group approach to mating, in which males form mating swarms— a nearly cylindrical cloud of flying male mosquitoes. It's unknown how these swarms form, but they tend to aggregate around some visual aberration of the environment, such as above a bare spot on the ground or level with the roof of a house.

It's also unknown how females locate these swarms, though multiple senses may be involved. "It's one of the mysteries of biology," Harrington said.

When females do fly into the swarm, however, males can identify them based on the frequency of their wing beats, which is lower than the males' frequency. This frequency identification is also used in non-swarming mosquito species and mating pairs will even harmonize their wing frequencies before mating, changing not only the beating of their wings but also moving their thorax box around, Harrington said.

It's unclear if fundamental wing frequency, which is related to body size, plays a role in mate choice, but experiments show that mosquitoes that are exposed to recordings of these "mating calls" choose to harmonize more with the wing frequencies of larger adults.

Chemical cues (pheromones) may also be important for mating, but researchers haven't investigated this much, Harrington said.

Surprisingly, only a single mosquito species is known to actively engage in courtship rituals. In the South American species Sabethes cyaneus, males will wave specialized structures on their feet — which resemble fringe boots, Harrington said — to impress the female.

Getting down to business

Mating in mosquitoes is quick, sometimes lasting no more than 15 seconds, and usually takes place in the air, though it can also occur on a surface.

Male mosquitoes have pincer-like structures called claspers on their abdomens, which they use to grab on to the female. The male's reproductive organ (the aedaegus) then everts and extends into the female's vagina for insemination.

Interestingly, the male's seminal fluid contains a suite of chemicals that have a range of physiological effects on the female, such as inducing her to lay eggs or take larger blood meals, Harrington said.

Unlike male mosquitoes, which will continue to mate until they die, most female mosquitoes will mate just once. They store sperm for the rest of their lives to fertilize tons of eggs, the amount of which depends on the ambient temperature and blood (a source of energy for egg development).

"They typically produce one batch of eggs for every blood meal they take," Harrington said. "At 28 degrees C [82.4 degrees F], you could get one egg batch every seven days, and some mosquitoes can lay 200 eggs or more in a batch."