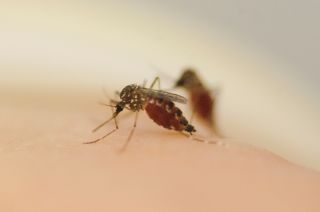 Campers, take comfort: Scientists have found a way to genetically alter mosquitoes so they lose their preference for the scent of humans.

In the study, researchers created mosquitoes with a mutant olfactory gene that disrupted the insects' sense of smell. The mutant mosquitoes failed to respond to human scent except in the presence of carbon dioxide, and even then, they were no more attracted to humans than to other animals. The modified bloodsuckers also lost their aversion to the smell of the insect repellent DEET, but could still detect the potent chemical on the surface of human skin. [Gallery: Drop-Dodging Mosquitoes]

Knowing the factors that attract mosquitoes to humans opens the door to finding new ways of repelling them. "By disrupting a single gene, we can fundamentally confuse the mosquito from its task of seeking humans," senior study author Leslie Vosshall, a neurogeneticist at The Rockefeller University in New York, said in a statement from Howard Hughes Medical Institute.

Vosshall had been studying a gene called "orco" in flies, which played an important role in the flies' ability to detect odors. There were hints that mosquitoes utilized smells in their environment, so Vosshall suspected the orco gene might be important for mosquitoes as well as flies.

Using genetic engineering techniques, Vosshall and her colleagues mutated the orco gene in Aedes aegypti mosquitoes. The team exposed normal and mutant mosquitoes to nylon sleeves smelling of humans, in the presence or absence of carbon dioxide. The scientists also tested the mosquitoes' ability to distinguish between air that passed over a human arm or a live guinea pig.

The mutant mosquitoes couldn't detect human scent in the absence of carbon dioxide. Even with carbon dioxide, the mutants showed no preference for human scent, and were equally attracted to the human and guinea pig scents.

In another experiment, Vosshall's team measured how the insect mutants responded to DEET, the active ingredient in many insect repellants. The mosquitoes were offered a choice of a human arm slathered in DEET or a clean arm.

Mosquitoes with the mutant scent gene flew toward both arms indiscriminately. Upon landing, however, the bugs found the DEET arm strongly repulsive. The findings suggest mosquitoes use two distinct mechanisms to detect DEET — one that acts at a distance and one used in close proximity to the skin.

Further research will explore how the orco gene affects the odor receptors that mosquitoes use to sniff out human flesh. Once scientists understand how current insect repellants work, they can develop better ones, Vosshall said.

The findings were reported online today (May 29) in the journal Nature.