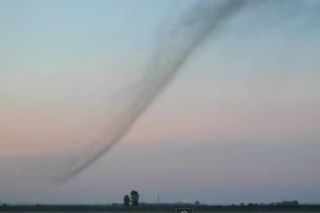 Still image of a "bugnado" captured on film in July in Iowa.
(Image: © Mike Hollingshead | YouTube)

Tornadoes aren't the only funnels that touch down in the Midwest. "Bugnadoes" — vortexes of swarming bugs — occasionally twist through, too.

On the night of July 4, professional storm chaser and photographer Mike Hollingshead caught sight of an enormous bugnado in southwestern Iowa. The air above the cornfields was so thick with bugs "it looked like it was smoking," Hollingshead told Life's Little Mysteries. He captured the strange sight on camera, and his video has gone viral in recent days.

But what are the bugnadoes?

Joe Kieper, an entomologist who is executive director of the Virginia Museum of Natural History, says they are swarms of either mayflies or midges, two types of insects that spend their immature stages of life as aquatic nymphs, then rise to the water's surface, grow wings and take flight as adults.

At that point, their lives are almost over. They've got just one duty left: reproduction.

A swarm like this is actually quite typical, albeit usually much smaller.

"This is a mating flight," Kieper said. "The males are trying to impress the females, and the females select a mate." No one knows what the females are looking for when they choose a sex partner from among the masses, Kieper said. Regardless, after the new pair mates in an airborne frenzy, the males die. The females head back to water to lay their eggs, and then they die, too.

"It's a remarkable video as it shows their cooperative behavior," he said.

It's somewhat of a mystery how a population of insects manages to emerge from the water at exactly the same time, enabling this mass mating dance. "It's an amazing feat of nature that they can all synchronize in this way," Kieper said.

Entomologists' best bet is that the insects' bodies are attuned to day length. However, they don't emerge on exactly the same day every year, so daylight hours aren't the only factor. Annual temperature variations probably play a part, too. "If it's a warm year, they'll emerge earlier. If it's a cool year, a little later," Kieper said. How all the insects — each of which develops independently — take these two factors into account and decide upon exactly the same moment to emerge, no one knows.

According to Hollingshead , the swarm occurred above cornfields that had been flooded by the Missouri River during extreme spring rainfall. "A temporary swamp or wetlands set itself up this year," the bugnado videographer wrote in an email.

Based on this information, Kieper suspects the insects are midges rather than mayflies. While mayflies take a year to develop, midges (relatives of houseflies) are opportunists that readily move into new habitats, and they can complete their life cycles in just three to five weeks.

But whichever type of insect they were, they literally had a field day this summer. "If it's a flooded cornfield, that would explain why there are so many critters," Kieper said. "When you get water in a field, vegetation starts to rot and the water fills with bacteria. This is food for the insects. Because there's so much food available, when they emerge as adults, you get this huge swarm."

Hollingshead has seen bugnadoes before, but not as vast as this. "Never out of all the other times I went looking could I ever find such a mass like I did that night," he wrote. "Nothing was ever so fixed in one location and climbing so tall as a vortex as that night."