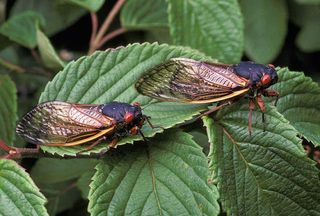 It's a cicada year in the American South. Since 1998, the Great Southern Brood — one of the largest groups of synchronized cicadas in the world — has been slowly developing underground from Virginia to Georgia to Oklahoma to Missouri. Now, at the end of their transformation from nymph stage to adulthood, the brood is bursting forth in a great flurry.

For a few summer weeks, the cicadas will sing and breed. Then they'll die, their eggs will hatch, the nymphs in those eggs will work themselves into the ground, attach themselves to roots and grow. Thirteen years from now, the next generation will emerge.

Scientists have little idea how vast broods of these insects manage to synchronize their long schedules and emerge simultaneously. The synchrony even extends across species. "A single brood may be comprised of one to three different species of periodical cicadas," said Greg Hoover of the Penn State Department of Entomology.

But scientists do know why cicadas get in sync.

First of all, because they emerge so infrequently, no predators have evolved specifically to live off of eating them. Secondly, emerging en masse increases an individual's chance of survival: Predators cannot possibly devour the lot of them when thousands emerge at the same time. "The sheer numbers in these broods allows for predator satiation, and ensures survival of broods that are larger," Hoover told Life's Little Mysteries, a sister site to LiveScience.

But what rhyme or reason is there to a life cycle of 13 years? Meanwhile, broods of cicadas in the Eastern United States have 17-year cycles. Why 13 and 17?

The key factor is that both numbers are prime; they can't be divided evenly by any smaller numbers (except one). It is no mere coincidence that cicadas have evolved indivisible life cycles. As explained by the entomologist Stephen Jay Gould, prime cycles have a major evolutionary advantage over cycles that are multiples of smaller numbers of years, and for a simple reason: They make cicadas more elusive.

"Many potential predators have 2-5 year life cycles. Such cycles are not set by the availability of cicadas (for they peak too often in years of non-emergence), but cicadas might be eagerly harvested when the cycles coincide," Gould wrote in his best-seller "Ever Since Darwin" (Norton 1977). "Consider a predator with a life-cycle of five years: if cicadas emerged every 15 years, each bloom would be hit by the predator. By cycling at a large prime number, cicadas minimize the number of coincidences (every 5×17, or 85 years, in this case)."

In summary: "Thirteen- and 17-year cycles cannot be tracked by any smaller number."

So they spend their lives ticking away underground, waiting to emerge in mathematically elusive intervals so as not to be tracked by predators. All that for a few short weeks of fresh air on their wings, and a genetic desire to carry on.