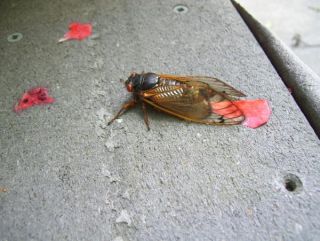 After 13 years underground, Brood 19 is here, and they're making themselves known.
(Image: © Rhonda Gardner.)

One of the rarest, and perhaps most irritating, natural phenomena has begun across the South: the emergence of the Great Southern Brood.

The brood millions of plant-munching insects called cicadas is finally crawling to the surface after 13 years underground. The cicadas will spend a few weeks mating and laying eggs. Then they'll all die.

In middle Georgia, the emergence is under way and the air is alive with an unending drone of mating calls, 24 hours a day.

Known as Brood 19, these cicadas crawl above ground every 13 years. They live in about a dozen states in the Southeast and Midwest and can be found as far north as Missouri and Illinois.

The brood is harmless, except to one's peace of mind. They make a constant electric hum that Kevin Kramer, of the Georgia Department of Natural Resources in central Georgia, likens to a muffled burglar alarm.

"We hear them every day," Kramer told OurAmazingPlanet. "You can't ignore it."

Once aboveground, cicada nymphs shed their hardened exoskeletons and go looking for action. These cicadas are freaky looking if not a bit flashy, with hungry red eyes and orange veined wings.

Males draw attention to themselves by making a lot of noise, perhaps not shockingly. They contract structures called tymbals on their abdomens to produce their call. The females flirt back by clicking their wings. The noise is loudest in the low areas because that's where they are emerging all at once, in the greatest numbers.

"It can be deafening here on the refuge in some of the bottoms," Johnson said.

At the Piedmont Refuge, the only time the brood calmed down was after tornadoes came through last week. That shut them up for about three hours, Johnson said.

Aside from their incessant noise and creating the exoskeleton trash, the cicadas aren't looking for any trouble. They don't sting or bite, although they'll occasionally nibble on people, the feeling akin to a pinprick.

Brood 19 is not poisonous and won't transmit disease. The cicadas do eat plants, and if too many bugs gang up on something Johnson has seen entire trees coated in cicadas they may leave a mark. But most people prefer to wait them out instead of spraying pesticides.