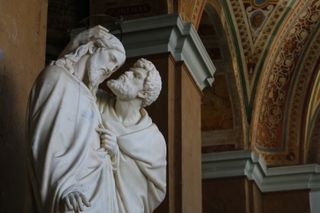 A statue in the Lateran Palace in Rome depicts Judas betraying Jesus with a kiss.
(Image: © Noyan Yalcin/Shutterstock)

Judas Iscariot is famous for being a disciple of Jesus who betrayed him in exchange for money.

Of the 12 disciples of Jesus, "only Peter gets more lines of coverage from the Gospel writers than does Judas," wrote William Klassen in his book "Judas: Betrayer or Friend of Jesus?" (Fortress Press, 1996). Klassen was a research professor at École Biblique et Archéologique in Jerusalem.

Despite his biblical fame, little is known about Judas. His story is so unclear that while many scholars believe he did exist, some scholars think Judas is fictional.

"No one has succeeded in locating any sources of Judas independent of retellings of the New Testament narratives, which is why reputable thinkers can continue disbelieving in his historical reality," wrote Susan Gubar, a professor emeritus of English at Indiana University, in her book "Judas" (W.W. Norton & Company, 2009).

Accounts of Judas are preserved in the bible in the Gospels of Mark, Matthew, Luke and John, as well as in the Acts of the Apostles (also called the "Book of Acts").

The biblical stories do not say where or when Judas was born, and describe different versions of how he died. The stories say that Judas was a disciple of Jesus and that he betrayed his leader, agreeing to turn him over to a crowd led by the chief priests in exchange for money — 30 pieces of silver, according to the Gospel of Matthew.

The Gospels of Matthew, Mark and Luke all specify that Judas pointed out Jesus by kissing him when the crowd approached. The crowd then brought Jesus to Pontius Pilate, the Roman governor of Judea. Jesus was subsequently tried and crucified.

A recently translated, 1,200 year-old text written in Coptic — an Egyptian language that uses the Greek alphabet — claims that Judas used a kiss to betray his leader because Jesus had the ability to change his appearance. Judas' kiss would clearly identify Jesus to the crowd. The four gospels, on the other hand, don't attempt to explain why a kiss was used to identify Jesus.

All the gospels indicate that Jesus knew he was going to be betrayed when he had supper with his disciples shortly before his arrest. The Gospel of John states that Jesus confronted Judas at the last supper, telling him, "What you are about to do, do quickly."

The Gospels of Luke and John both say that Satan "entered" Judas at certain times and may have influenced his decision to betray Jesus.

The Gospel of John describes Judas as an untrustworthy person. It claims that Judas was the treasurer for Jesus and his 12 disciples, carrying the money bag the group shared and sometimes stealing from it. When a woman put perfume on Jesus shortly before the last supper, Judas objected, the Gospel of John says.

"'Why wasn't this perfume sold and the money given to the poor? It was worth a year's wages.' He did not say this because he cared about the poor, but because he was a thief; as keeper of the money bag, he used to help himself to what was put into it." John 12:4-6.

The bible has two different accounts explaining how Judas died.

The Gospel of Matthew says that Judas regretted betraying Jesus, and tried to return the 30 pieces of silver that he had been paid.

In Matthew 27:3-5, Judas tells the chief priests and elders, "'I have sinned,' he said, 'for I have betrayed innocent blood.' 'What is that to us?' they replied. 'That's your responsibility.' So Judas threw the money into the temple and left. Then he went away and hanged himself."

The 30 pieces of silver were then used to buy a plot of land that became a burial ground for foreigners — a place called the Field of Blood.

The Acts of the Apostles depicts a more dramatic ending for Judas, claiming that he used the 30 pieces of silver to buy a field, where he gruesomely died. "With the payment he received for his wickedness, Judas bought a field; there he fell headlong, his body burst open and all his intestines spilled out. Everyone in Jerusalem heard about this, so they called that field in their language Akeldama, that is, Field of Blood." Acts 1:18-19.

A man named Matthias replaced Judas as one of the 12 disciples, the Acts of the Apostles says.

In 2006, National Geographic published the "Gospel of Judas," a late third century text that may depict Judas in a better light. The work is what scholars call an "apocryphal" text, one that was never included in the bible. Numerous apocryphal texts discussing Jesus and his life were written throughout the ancient world.

Like some other ancient texts, the Gospel of Judas is written in Coptic. The text was translated by a team of scholars working with National Geographic. The translation suggests that Jesus asked Judas to betray him so that his execution could take place.

According to the translation, Jesus told Judas "Step away from the others [the other disciples] and I shall tell you the mysteries of the kingdom. It is possible for you to reach it, but you will grieve a great deal. For someone else will replace you, in order that the twelve [disciples] may again come to completion with their god."

However, the team's translation and interpretation of the text has been criticized by other scholars. April DeConick, chair of the department of religion at Rice University in Houston, wrote on her website that there are a number of errors in the translation and that the Gospel of Judas is actually a "parody about a 'demon' Judas written by a particular group of Gnostic Christians we call the Sethians."

A new translation and study of the Gospel of Judas is scheduled to be published in April, 2019, by Oxford University Press.