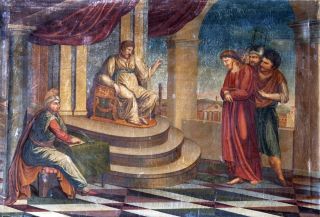 According to the Bible, Pontius Pilate presided over Jesus' trial.
(Image: © Shutterstock)

Pontius Pilate was the Roman prefect (governor) of Judea around A.D. 26-37 and is most famous for presiding over the trial of Jesus, as described in the Bible.

"In the Christian tradition, Pontius Pilate is forever associated with one event," wrote Warren Carter, a professor of New Testament at Brite Divinity School in Fort Worth, Texas, in his book "Pontius Pilate: Portraits of a Roman Governor" (Liturgical Press, 2003). Pilate "used his life-and-death power as governor to execute Jesus of Nazareth in Jerusalem around the year 30."

Despite his biblical fame, little is known about Pilate. Only a small number of historical accounts and artifacts that date close to his lifetime survive today. [10 Fascinating Biblical-Era Discoveries from 2018]

"With this limited information, we cannot write a biography of Pilate, get inside his head, understand how he ticked," Carter wrote. "We simply do not have basic information about him, let alone anything that would enable us to understand his psychological makeup and workings."

Centuries after Pilate's life, some Christians developed a positive view of the prefect, with a few churches even recognizing him as a saint. However, the surviving first-century writings tell of a prefect who was willing to use lethal force on unarmed protesters and who presided over a massacre so bad that he was recalled to Rome.

The surviving records say almost nothing about Pilate's life before he became prefect of Judea or after he was recalled to Rome.

"On the basis of information about other [Roman] governors and about how the Roman imperial system maintained control, we can reasonably guess that Pilate probably had some sort of military career in which he most likely distinguished himself in some way as an officer," Carter wrote. "We can also be fairly confident that he belonged to the upper stratum of Roman society, that his family was wealthy."

The Book of Matthew claims Pilate's wife had a dream about Jesus. "While Pilate was sitting on the judge's seat, his wife sent him this message: 'Don't have anything to do with that innocent man, for I have suffered a great deal today in a dream because of him.'" Matthew 27:19.

The ancient writers Philo (20 B.C.-A.D. 50) and Josephus (A.D. 37-100) both described incidents in which Pilate offended the Jews. Philo wrote that Pilate had shields dedicated to Emperor Tiberius set up at Herod's palace, in Jerusalem. The people of Jerusalem took offense at this although historians are not entirely certain why. Ancient Jewish customs do not allow the veneration or widespread display of human images and it's possible that the prominent display of the Emperor's name was seen as violating religious custom.

Philo claimed that the people of Jerusalem protested the display of the shields and sent letters to the Roman Emperor Tiberius asking for the shields to be taken down. Tiberius wrote to Pilate rebuking his decision to display the shields and ordered that they be removed. Philo wrote that Pilate was afraid that the people would tell Tiberius of "the briberies, the insults, the robberies, the outrages and wanton injuries, the executions without trial constantly repeated, the ceaseless and supremely grievous cruelty" that Pilate allegedly committed. Despite his fear, Pilate did not take down the shields, and it's not known whether the people told Tiberius of Pilate's alleged misdeeds (translation by English classicist F. H. Colson).

Josephus told of another, more serious incident in which flags were displayed in Jerusalem that had the name and possibly the image of Tiberius.

In Josephus' book "The Jewish War," the ancient historian wrote that the flag display "caused great excitement among the Jews; for those who were near were amazed at the sight, which meant that their laws had been trampled on — they do not permit any graven image to be set up in the city — and the angry city mob was joined by a huge influx of people from the country" (translation by English classist G.A. Williamson).

The people asked that the flags be taken down. When Pilate refused, people went to his house and remained outside for five days, facing the ground (translation by Williamson).

Pilate had soldiers surround the protesters and threatened to kill them if they didn't accept the flags. "At this, the Jews, as though by agreement, fell to the ground in a body and bent their necks, shouting that they were ready to be killed rather than transgress the law," Josephus wrote (translation by Williamson). Pilate backed down, ordering the flags be removed from Jerusalem.

Josephus also claimed that Pilate used money from a sacred treasury to build an aqueduct, something that further enraged Jewish opinion against him. This enraged the populace and they went to the tribunal and shouted at Pilate, wrote Josephus (translation by Williamson). Pilate had his soldiers club many of the protesters, and "the fate of those who perished horrified the crowd into silence," Josephus wrote.

In his book "Antiquities of the Jews," Josephus claimed that Pilate massacred a group of Samaritans (a group that lives within Israel) who were trying to climb Mount Gerizim to search for vessels buried by Moses. Shortly after this incident, Pilate was replaced in Judea by a man named Marcellus and sent back to Rome. Historical records do not say what happened to him after he returned to Rome.

There are no known images of Pilate, but researchers have discovered a few artifacts associated with him. Among those are bronze coins that were minted in Judea between A.D. 29 and 32. The coins have pagan vessels on one side and designs used in ancient Judaism on the other.

"The fact that one side of each coin always bears a purely Jewish design may suggest that Pilate deliberately depicted both Jewish and Roman symbols in an attempt to continue the attempt of Herod I and his successors to integrate Judaea further into the Empire," wrote Helen Bond, head of the School of Divinity at the University of Edinburgh, Scotland, in her book "Pontius Pilate in History and Interpretation" (Cambridge University Press, 1998).

Another artifact associated with Pilate is an inscription discovered in 1961 in a Roman theater at the site of Caesarea. It gives Pilate's name and states that he is prefect of Judea. It also has the name of Emperor Tiberius. Little else of the inscription has survived.

A more uncertain artifact is a copper finger ring with an inscription saying, "of Pilatus," that was found at Herodium, a palace built for King Herod. The ring was discovered during excavations conducted from 1968 to1969. While it's unlikely that Pilate himself wore a simple finger ring made of copper, it's possible that it belongs to someone who had a connection to the prefect and decided to use his last name.

Virtually everything known about Pilate's role in the trial of Jesus comes from the Bible. A passage in Josephus' "Antiquities of the Jews" mentions Jesus. But many historians believe that the passage was not written by Josephus himself but was added later by a scribe copying the historian's book. [10 Biggest Historical Mysteries That Will Probably Never Be Solved]

The gospels of Matthew, Mark, Luke and John have different accounts of the trial, but all four agree that Pilate was reluctant to execute Jesus, believing that the accused had not committed an offense warranting crucifixion. The four gospels all claim that a crowd that included the chief priests encouraged Pilate to find Jesus guilty and crucify him.

The Gospel of Matthew says that when Pilate failed to convince the crowd that Jesus was innocent, the prefect "took water and washed his hands in front of the crowd. 'I am innocent of this man's blood,' he said. 'It is your responsibility!'" Matthew 27:24.

The four gospels all claim that Pilate offered the crowd a choice between freeing Barabbas, a man accused of leading a violent rebellion, or Jesus, and the crowd asked that Barabbas be freed.

The Gospel of John claims that Jesus and Pilate had a philosophical debate during the trial. "You say that I am a king. In fact, the reason I was born and came into the world is to testify to the truth. Everyone on the side of truth listens to me," Jesus said. And Pilate asked, "What is truth?"