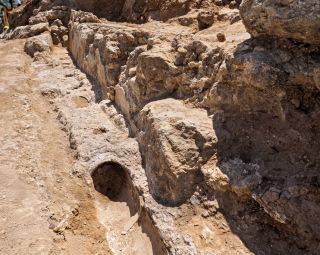 Part of an ancient aqueduct built more than 2,000 years ago to transport water into the city of Jerusalem was uncovered during a recent construction project, according to the Israel Antiquities Authority.

A section of the so-called Lower Aqueduct was discovered in the modern-day neighborhood of Umm Tuba, in East Jerusalem, during efforts to construct a new sewer line. The Lower Aqueduct was originally built more than 2,000 years ago by kings in the Hasmonean dynasty, who ruled Judea and its surrounding regions from about 140 B.C. to 37 B.C., and preceded King Herod the Great.

The sprawling, 13-mile-long (21 kilometers) aqueduct carried water to the capital, and "operated intermittently until about 100 years ago," Ya'akov Billig, director of the aqueduct excavation with the Israel Antiquities Authority (IAA), said in a statement. [The Holy Land: 7 Amazing Archaeological Finds]

The Lower Aqueduct fed from the En Eitam spring, which is located near three ancient reservoirs known as Solomon's Pools that are about 3 miles (5 km) southwest of Bethlehem. As water passed through the channel, it flowed down a gentle slope to Jerusalem, passing through the modern-day neighborhoods of Umm Tuba, Sur Bahar, East Talpiot and Abu Tor, according to the IAA.

"At first, the water was conveyed inside an open channel, and about 500 years ago, during the Ottoman period, a terra cotta pipe was installed inside the channel in order to better protect the water," Billig said.

For nearly 2,000 years, the Lower Aqueduct remained one of Jerusalem's principal sources of water, IAA officials said, which is why city rulers kept the structure so well preserved. About 100 years ago, the channel was replaced by an electrically operated water-distribution system.

The Umm Tuba section of the aqueduct was uncovered by workers at Gihon Company Ltd., who are constructing the new sewer line. Archaeologists at the IAA conducted an excavation of the site following its discovery, but the remains have since been covered up again to preserve the structure and prevent any damage, agency officials said.

Other sections of the extensive aqueduct have been uncovered in the past, including in the Armon Ha-Natziv tunnels in the City of David, on the Sherover promenade in southern Jerusalem and around the Sultan's Pool along the west side of Mount Zion in Jerusalem, IAA officials said.