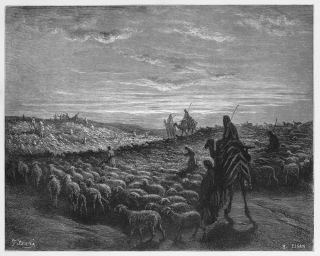 Abraham Journeying into the Land of Canaan. Drawing by Gustave Dore, published in an 1885 Bible.
(Image: © Public domain)

The Canaanites were people who lived in the land of Canaan, an area which according to ancient texts may have included parts of modern-day Israel, Palestine, Lebanon, Syria and Jordan.

Much of what scholars know about the Canaanites comes from records left by the people they came into contact with. Some of the most detailed surviving records come from the site of Amarna, in Egypt, and from the Hebrew Bible. Additional information comes from excavations of archaeological sites that the Canaanites are thought to have lived in.

Scholars doubt that the Canaanites were ever politically united into a single kingdom. In fact, archaeological excavations indicate that the "Canaanites" were actually made up of different ethnic groups. During the Late Bronze Age (1550-1200 B.C.), "Canaan was not made up of a single 'ethnic' group but consisted of a population whose diversity may be hinted at by the great variety of burial customs and cultic structures" wrote Ann Killebrew, an archaeology professor at Penn State University, in her book "Biblical Peoples and Ethnicity" (Society of Biblical Literature, 2005).

The earliest undisputed mention of the Canaanites comes from fragments of a letter found at the site of Mari, a city located in modern-day Syria. Dating back about 3,800 years the letter is addressed to "Yasmah-Adad," a king of Mari, and says that "thieves and Canaanites" are in a town called "Rahisum." The surviving portion of the letter alludes to a conflict or disorder that is taking place in the town.

Another early text that talks of the people who lived in Canaan dates back about 3,500 years and was written on a statue of Idrimi, a king who ruled a city named "Alalakh" in modern-day Turkey. Idrimi says that at one point he was forced to flee to a city in "Canaan" called "Amiya" — possibly located in modern-day Lebanon. Idrimi doesn't call the people at Amiya "Caananites" but instead names a variety of different lands that they are from, such as "Halab," "Nihi," "Amae" and "Mukish." Idrimi claims that he was able to rally support at Amiya and become king of Alalakh.

However, this doesn't mean that the different people in Canaan were not always grouped together. Administrative texts found at Alalakh, and at another city named Ugarit (located in modern-day Syria) show that "the designation 'the land of Canaan' was employed to specify the identity of an individual or group of individuals in the same way that others were defined by their city or land of origin," wrote Brendon Benz, a professor at William Jewell College in Missouri, in his book "The Land Before the Kingdom of Israel" (Eisenbrauns, 2016). For instance a male from a city in Canaan who was living at Alalakh or Ugarit could be identified in records as being a "man of Canaan" or being a "son of Canaan," wrote Benz.

A batch of texts that mentions Canaan comes from the site of Amarna, in Egypt. Amarna was constructed as the capital of Egypt by the pharaoh Akhenaten (reign ca. 1353-1335 B.C), a ruler who tried to focus Egypt's polytheistic religion around the worship of the "Aten," the sun disk. The texts consist of diplomatic correspondence between Akhenaten (and his immediate predecessors and successors) and various rulers in the Middle East. Modern-day scholars often call these texts the "Amarna letters."

The letters show that there were several kings in Canaan. A diplomatic passport written by Tusratta, a king of Mittani (a kingdom located in northern Syria) tells the "kings of the land of Canaan" to let his messenger "Akiya" pass through safely to Egypt, and warns the kings of Canaan that "no one is to detain him."

The letters also show that Egypt held considerable power over these Canaanite kings. One letter written by a king of Babylon named "Burra-Buriyas" complains about the killing of Babylonian merchants in Canaan and reminds Egypt's pharaoh that "the land of Canaan is your land and its kings are your servants." (Translation from Brandon Benz's book "The Land Before the Kingdom of Israel")

Egyptian texts also show that Egypt's pharaohs sent military expeditions into Canaan. A stele erected by a pharaoh named Merneptah (reign ca. 1213-1203 B.C.) claimed that "Canaan has been plundered into every sort of woe." The same stele also claims that Merneptah "laid waste" to "Israel."

The Canaanites are mentioned often in the Hebrew Bible. The stories say that god promised to give the land of the Canaanites (along with land belonging to several other groups) over to the Israelites after they escaped from Egypt.

In the stories, God tells Moses that "I have heard them [the Israelites] crying out because of their slave drivers, and I am concerned about their suffering. So I have come down to rescue them from the hand of the Egyptians and to bring them up out of that land into a good and spacious land, a land flowing with milk and honey — the home of the Canaanites, Hittites, Amorites, Perizzites, Hivites and Jebusites." (Exodus 3:7)

The historical accuracy of the stories told in the Hebrew Bible is a point of dispute among scholars. Some scholars believe that there was no exodus from Egypt and that the Israelites lived in Canaan alongside various "Canaanite" groups during the second millennium B.C. Scholars who study ancient languages sometimes describe Hebrew, a language used by the Israelis, as a "Canaanite" language noting that it is similar in some respects to Phoenician.

On the other hand, some scholars argue that some of the Israelites could have left Egypt at some point during the second millennium B.C. Excavations and ancient texts show that various foreign groups lived in Egypt at different points in the civilization's history, says James Hoffmeier, an archaeologist and professor at Trinity International University, in a series of lectures and papers.

Hoffmeier also points out that the ancient city of Ramesses, mentioned in the exodus stories told in the Hebrew Bible, does exist and archaeologists have determined that it flourished for several centuries during the second millennium B.C., becoming abandoned about 3,100 years ago.