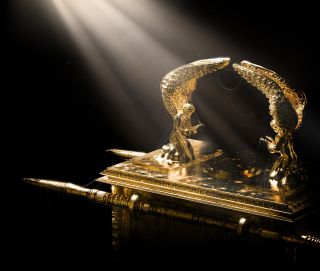 A modern day artist's imagining of what the Ark of the Covenant may have looked like.
(Image: © Fer Gregory/Shutterstock)

The Ark of the Covenant is a chest that held tablets engraved with the Ten Commandments.

According to the Hebrew Bible, the ark was constructed by the Israelites while they were camping out in the Sinai Desert, after they fled Egypt. The Hebrew Bible doesn't specify when they fled Egypt, and there is a debate among scholars as to whether there ever was an exodus from Egypt. The ark vanished when the Babylonians conquered Jerusalem in 587 B.C.

The ark has a number of seemingly magical powers, according to the Hebrew Bible. In one story, the Jordan River stopped flowing and remained still while a group of priests carrying the ark crossed the river. Other stories describe how the Israelites took the ark with them into battle where the powers of the ark helped the Israelites defeat their enemies. [Biblical Battles: 12 Ancient Wars Lifted from the Bible]

When the ark was captured by the Philistines, outbreaks of tumors and disease afflicted them, forcing the Philistines to return the ark to the Israelites. Some stories describe how death would come to anyone who touched the ark or looked inside it.

Understanding the stories surrounding the ark is challenging because of the different accounts. Some scholars believe that multiple arks may have been constructed and used at the same time or at different times.

The story of the construction of the ark told in the Book of Exodus describes in great detail how God ordered Moses to tell the Israelites to build an ark out of wood and gold, with God supposedly giving very precise instructions.

Poles made of acacia wood and gold were used to carry the ark and two cherubim (angels) were to be sculpted out of gold and placed on the lid of the ark. "The cherubim are to have their wings spread upward, overshadowing the cover with them. The cherubim are to face each other, looking toward the cover." Exodus 25:20. Tablets engraved with the Ten Commandments were placed inside the ark.

The Hebrew Bible directed that the Ark of the Covenant be placed within a movable shrine known as the tabernacle. A curtain that prevented people from viewing the Ark of the Covenant was set up within the tabernacle and an altar and incense burners were placed in front of the curtain. The incense was made of gum resin, onycham, galbanum and frankincense, and was to be burned by Aaron, the brother of Moses, and his sons at morning and sunset.

A man named Bezalel was chosen by God to build the Ark of the Covenant and furnishings located within the tabernacle, according to the Hebrew Bible. "I have filled him with the Spirit of God, with wisdom, with understanding, with knowledge and with all kinds of skills — to make artistic designs for work in gold, silver and bronze, to cut and set stones, to work in wood, and to engage in all kinds of crafts." Exodus 31:3-5. Oholiab was chosen by God to be Bezalel's assistant, with skilled craftsmen helping them, the Hebrew Bible says.

During the reign of King Solomon, the First Temple, which is the holiest place in Judaism, was constructed in Jerusalem and the Ark of the Covenant was placed in an inner sanctuary covered in gold, the Hebrew Bible says.

The Book of Deuteronomy, on the other hand, tells the story of the construction of a much more modest Ark of the Covenant. The book says that at one point the Israelis were worshipping a golden calf instead of God. Moses was so enraged by this that he smashed the stone tablets engraved with the Ten Commandments. God ordered Moses to help create new tablets engraved with the Ten Commandments and create a wooden ark that they could be placed in.

"Chisel out two stone tablets like the first ones and come up to me on the mountain. Also make a wooden ark. I will write on the tablets the words that were on the first tablets, which you broke. Then you are to put them in the ark." Deuteronomy 10:1-2.

"So I [Moses] made the ark out of acacia wood and chiseled out two stone tablets like the first ones, and I went up on the mountain with the two tablets in my hands. The Lord wrote on these tablets what he had written before, the Ten Commandments he had proclaimed to you on the mountain…." Deuteronomy 10:3-4. Moses then put the tablets inside the wooden ark.

It's possible that there were multiple arks that could have been used at the same or different times.

"Before all the cultic affairs of the Israelites were concentrated exclusively in the capital, Jerusalem, there had been arks, probably of different sorts, wherever [God] was worshipped," Tudor Parfitt, a professor of religion at Florida International University who has done extensive research on the Ark of the Covenant, wrote in his book "The Lost Ark of the Covenant: Solving the 2,500 year-old Mystery of the Fabled Biblical Ark" (Harper Collins, 2008).

These early arks would have been "simple wooden containers," wrote Parfitt. After Israeli worship became centralized in Jerusalem the story may have been retold to describe one elaborate Ark of the Covenant made of gold, Parfitt wrote.

It's not known what happened to the ark after the First Temple was destroyed by the Babylonians. According to the Book of Maccabees, the ark was hidden in a cave on Mount Nebo by the prophet Jeremiah who said that this "place shall remain unknown until God gathers his people together again and shows his mercy." 2 Maccabees 2:7.

Another story tells of how the ark was brought to Ethiopia and is now at the Church of Our Lady Mary of Zion in Axum. Supposedly, only the Guardian of the Ark is allowed to view this ark, but Live Science recently reported that a scholar named Edward Ullendorff saw the ark during World War II and found that it was not the original ark.

There are many other stories of the ark's survival that Parfitt mentioned in his book. There are stories about how it is hidden near Jerusalem, in the city of Mecca and even in New Guinea.

One text called the "Treatise of the Vessels" says that the ark "shall not be revealed until the day of the coming of the Messiah son of David…." And the Book of Revelation claims that the ark will not be seen again until the end times.

"Then God's temple in heaven was opened, and within his temple was seen the Ark of his Covenant. And there came flashes of lightning, rumblings, peals of thunder, an earthquake and a severe hailstorm." Revelation 11:19.