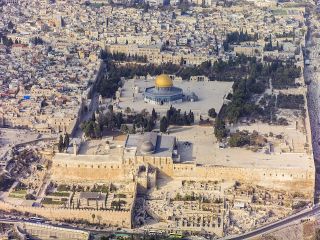 It is the subject of adulation, divine inspiration and heated controversy, but the history of Jerusalem is as long as it is complex. Considered to be a holy site by Jews, Muslims and Christians alike, the city is thousands of years old and in that time has survived world wars and natural disasters.

Simon Sebag Montefiore is a historian and best-selling author. He has written several books on a wide range of topics, such as Stalin, the Romanovs and the speeches that changed the world. His worldwide best-seller, "Jerusalem: The Biography" (Weidenfeld & Nicolson, 2014), covers the full history of this fascinating city.

Montefiore spoke with Live Science's sister publication, All About History, about the history of Jerusalem and how it became the "center of the world." This interview has been edited for length and clarity.

Q: What was so special about Jerusalem that made people want to make it their holy city?

The development of Jerusalem as the universal holy city is one of the strangest phenomena of geopolitics and religious development. The fact is that there was nothing special about it, except the fact that it was a fortress/hill and there was a spring next to it.

But it wasn't on any major trade routes. It was far from the sea. It was a mountain in the blistering Judean desert. In those days we think there was much more fauna and forestry than there is now. It was very unlikely to become the holy city of the Western world.

Simon Sebag Montefiore is a best-selling historian, with books published in 48 languages. He is the author of the international best-seller "Jerusalem: The Biography," (Weidenfeld & Nicolson, 2014).

Q: How challenging is it to find sources about Jerusalem that can be relied upon?

There are very few sources and you can't just use the Bible.

What's interesting is the obsession with King David. That's a big question that everyone is obsessed with: Did King David exist and is there proof of his existence? It is regarded as very political because if we can't find evidence of King David's existence and of the First Temple, then it has political implications today.

But in fact, this is a huge red herring because first of all, there is evidence in the Tel Dan Stele, which mentions the House of David. So, there is evidence that David was the founder of this kingdom, and it seems highly likely that he was.

Q: How important was the siege of Jerusalem in A.D. 70?

It's very important. It's a disaster and a drama on the scale of the Battle of Berlin in 1945 or Stalingrad or the Siege of Leningrad. It's one of the astonishing set pieces of human tragedy that is fascinating. Also, it has huge religious and political implications. It marks the end of Jewish independence in the Holy Land, and with a short interlude there wasn't really another Jewish realm until 1948.

Secondly, in terms of the Roman Empire, it meant that from then on Jews were banned from Jerusalem itself and it was really seen as the withdrawal of the divine favor or blessing from the Jewish people. That has huge implications because first, it led to the change in the Jewish religion itself. Before that, the Jewish religion was completely based around the Temple in Jerusalem and about the sacrifices of animals outside the Holy of Holies.

That was Temple Judaism, and after the siege, Judaism changed forever and the Old Testament, especially the five books of Moses [Torah], became a portable Jerusalem for Jewish people. That's the way it has remained to this day.

Also, the Christian religion up until then still worshipped as a Jewish faction within the Temple. When they saw that the Temple had fallen, they separated from the mother religion forever and modern Christianity comes from that moment, too.

Thirdly, 600 years later it was this event and then the development of Christianity after it that  convinced Muhammad that he was the third and final revelation of God. The first was the Jews, but that ended in A.D. 70 when the Temple was destroyed. The second was Christianity and he (Muhammed) regarded Jesus as a prophet. And the third was Muhammad himself and the final revelation that became Islam. A.D. 70 is when all modern religion began in the Western world.

There's a lot to see there and that's the exciting thing about Jerusalem. The ancientness of a holy place adds to its holiness. That's why so much of Jerusalem has been preserved in different ways. There are amazing things to see.

My favorite place is the Golden Gate on the Eastern Wall, which is very ancient and may have been built by Heraclius or the Umayyad Caliph, we're not really sure. It's the most beautiful place and it's the place where all three religions believe Armageddon, or Judgment Day, will start. There's tons to see there and one of the great joys of Jerusalem is that you can actually touch the stones [of the gate].

Q: What would you say is the biggest misconception about Jerusalem?

The biggest misconception about Jerusalem is that there's a monopoly of ownership by anyone. I think that one of the reasons why I wrote my book "Jerusalem" and why I'm so pleased it's been widely read is that I wanted people to understand that there are other narratives there. It's an international, universal city.

This interview originally appeared in All About History magazine.