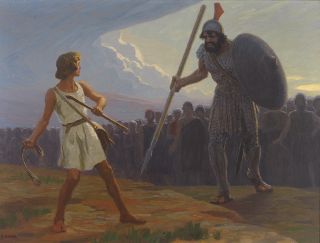 David vs. Goliath, by Gebhard Fugel (1863-1939). It's a well-known story, but whether David or Goliath ever existed — or if the Israelites and the Philistines ever fought — are matters debated by scholars.
(Image: © Public domain)

The Philistines were a group of people who arrived in the Levant (an area that includes modern-day Israel, Gaza, Lebanon and Syria) during the 12th century B.C. They came during a time when cities and civilizations in the Middle East and Greece were collapsing.

Much of what we know about the Philistines comes from Egyptian and Assyrian texts as well as the stories told in the Hebrew Bible. The Book of Joshua claims that the cities of Ashkelon, Gaza, Ashdod, Gath and Ekron were controlled by the Philistines about 3,000 years ago.

The Philistines themselves left no texts and, as such, much of what we know about them comes from the people they encountered. These texts often describe them negatively and today the name “Philistine” is sometimes used to describe someone who is warlike or who doesn’t appreciate art or culture.

Stories in the Hebrew Bible say that the Philistines clashed with the ancient Israelites many times. One of the battles supposedly took place between a Philistine force led by the giant man named Goliath and an Israelite force that included a man named David who would go on to become king of Israel. In the story David kills Goliath with a slingshot and the Israelites go on to rout the Philistine force. Whether David or Goliath ever existed — or if a series of wars between the Philistines and Israelites occurred — are matters debated by scholars.

The Philistines pop up again in Assyrian texts dating to the 8th century and 7th centuries B.C. when the Assyrian Empire ruled much of the Middle East.

One text records a treaty between the Assyrian ruler Esarhaddon (ca. 681 – 669 B.C.) and the ruler of a city named Tyre. In the treaty, Esarhaddon’s control “of the land of Philistines” is acknowledged and the ruler of Tyre agrees that the cargo of any ships wrecked off this area belong to Esarhaddon. The Assyrian texts don’t specify exactly what the “land of the of the Philistines” encompassed during the 7th century B.C.; however, an earlier text, dating to the reign of Tiglath Pileser III (reign 745–727 B.C.) says that the Assyrian king had trouble finding a reliable vassal ruler who could control Ashkelon (a place which the Hebrew Bible says was a Philistine city).

One text, written in the name of Tiglath Pileser III, says that a “King of Ashkelon” named Sidqia “did not bow to my yoke” and as a consequence, Sidqia and his family were deported to Assyria.

The Philistines disappear from written history during the 6th century B.C. when the Babylonian king Nebuchadnezzar II (reign ca. 605 BC – c. 562 BC) conquered the region and destroyed several cities, including Ashkelon.

Problems with the texts

The textual records of the Philistines leave modern-day scholars with a number of problems. The texts are few in number and were written by non-Philistines, who often had a negative view of them, said Raz Kletter, a professor at the University of Helsinki who excavates at the ancient city of “Yavne” – a place that texts indicate was ruled by the Philistines.

Kletter says that we can’t be sure if the Philistines themselves even considered themselves to be “Philistine” or whether they based their identity more on the city they lived in or the religion they practiced.

The reliability of the texts that refer to them is another issue that scholars encounter. Many of the surviving ancient texts come from the Hebrew Bible. The stories told in the Hebrew Bible claim that the Philistines were often in conflict with King David, a ruler who supposedly controlled a powerful Israelite kingdom around 3,000 years ago. However, research by a number of archaeologists, including Israel Finkelstein, a professor at Tel Aviv University, has found that there is little archaeological evidence that a powerful Israelite kingdom led by a king named David existed.

Jerusalem, which was supposed to be King David’s capital, appears to have been sparsely populated around 3,000 years ago, Finkelstein says.

“Over a century of archaeological explorations in Jerusalem — the capital of the glamorous biblical United Monarchy — failed to reveal evidence for any meaningful 10th-century building activity,” wrote Finkelstein in a paper published in 2010 in the book “One God? One Cult? One Nation: Archaeological and Biblical Perspectives” (De Gruyter, 2010).

Finkelstein says that if a united Israelite kingdom did exist 3,000 years ago it likely would have been a small entity, located in the highlands — away from the Mediterranean coast.

Searching for the Philistines

Over the past century, archaeologists have excavated the cities that ancient texts say the Philistines controlled.

However Mazar said that as time goes on the Aegean styles disappear, the people who used them gradually adopted local pottery designs and customs.

Today the question of what exactly constitutes a “Philistine” artifact or a “Philistine” burial is something widely debated by scholars. Recently, a team excavating the city of Ashkelon discovered a cemetery dating back about 3,000 years ago, which they claim is the “first” Philistine cemetery ever discovered. However this claim is disputed. Kletter’s team found a cemetery at Yavne that he thinks contains Philistine burials. Additionally, a team led by the late archaeologist Moshe Dothan found a cemetery at the site of Azor in the 1950s, which they also claimed is Philistine. Mazar also notes that a century ago Sir Flinders Petrie found burials in southern Israel that he claimed were Philistine.