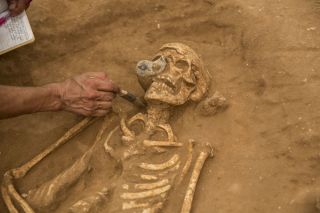 One of the skeletons found in the possible Philistine cemetery in Ashkelon, Israel, had a juglet stuck to its skull.
(Image: © Copyright Tsafrir Abayov/Leon Levy Expedition)

A 3,000-year-old graveyard with the bones of about 200 individuals discovered in Ashkelon, Israel, is being hailed as the first (and only) Philistine cemetery ever found.

If valid, the finding would reveal more about a mysterious people known as the Philistines. Archaeological evidence suggests that the Philistines came from the Aegean Sea region, along with other groups of people, during the 12th century B.C, at a time when cities and civilizations in Greece and the Middle East were collapsing.

According to the Hebrew Bible the Philistines fought a series of battles against the Israelis. The conflict between the Philistine giant Goliath and Israel's King David (who was armed only with a slingshot) is the most famous encounter. Little is known about the burial practices of this culture, archaeologists said.

However, experts not affiliated with the excavations are not yet convinced of the claim, saying that the identity of the people buried at the Ashkelon cemetery is not clear-cut and the finding itself has not been published in a peer-reviewed scientific journal. Further muddying the waters, other burials found in known Philistine cities, though never confirmed, also have dibs on the title of "first-discovered Philistine cemetery." [See Photos of the Possible Philistine Cemetery and Artifacts]

Archaeologists are waiting to see what the scientific publication of the Ashkelon cemetery will show. "Though the Ashkelon Philistine cemetery received much media attention, the full professional archaeological picture still awaits further clarification," said Shlomo Bunimovitz, an archaeology professor at Tel Aviv University in Israel.

The excavators acknowledge that other burials identified as Philistine have been found before, but say that their finds will show that most of the past discoveries were incorrectly identified as "Philistine."

"Ninety-nine percent of the chapters and articles written about Philistine burial customs should be revised or ignored now that we have the first and only Philistine cemetery, found just outside the city walls of Tel Ashkelon, one of the five primary cities of the Philistines," expedition co-director Lawrence Stager, a professor at Harvard University in Massachusetts, said in the press release announcing the find.

Are these Philistine people?

Radiocarbon dating and analysis of the cemetery's pots indicate that the cemetery was in use between the late 11th century B.C. and the early eighth century B.C., said Daniel Master, a professor at Wheaton College in Illinois and a co-director of the excavations at Ashkelon.

During this time period, Ashkelon was a Philistine city, as were Ashdod, Ekron, Gath and Gaza, according to ancient texts, Master said. [The Holy Land: 7 Amazing Archaeological Finds]

"We have a high degree of confidence that Ashkelon was a major Philistine city in this period because of a convergence of earlier and later texts from Egypt, the Hebrew Bible, Assyria and Babylon," Master said. He also noted that the burial styles seen at the cemetery appear different than those of other groups who lived in the region, such as the Canaanites.

Amihai Mazar, an archaeology professor at the Hebrew University of Jerusalem, said he believes the answer is more complicated. Previous archaeological studies indicate that the Philistines arrived in Israel from the Aegean Sea region during the 12th century B.C., he told Live Science in an interview.

By the 10th century B.C., the Philistines were intermixing with the local Canaanite population and adopting local traditions as well as Canaanite artifacts and practices, Mazar said.

He said that while you "can call [the cemetery] Philistine," there may be differences between how people were buried in this 3,000-year-old cemetery and how they would have been buried 3,200 years ago, when the Philistines were newcomers to the region.

Images of the cemetery published in media outlets show numerous Phoenician pots and a structure with Phoenician architectural elements, Mazar said, adding that these features suggest that some of the people buried in the cemetery could be Phoenician merchants rather than Philistines.

Master agreed that not all the people buried in the cemetery were Philistine. "No one can be sure of the affiliation of every person in any ancient cemetery," he said.

Additionally, the people buried in the cemetery may not have thought of themselves as being Philistine and may have identified themselves more on the city they lived in or on their religious practices, said Raz Kletter, a professor of theology at the University of Helsinki in Finland.

Kletter doesn't dispute that the people buried at Ashkelon used a series of artifacts that modern-day archaeologists identify as belonging to the Philistines. However, that doesn't mean the people buried there thought of themselves as Philistine, he said.

"We do not know how they [the Philistines] viewed themselves, having few written sources that are mostly from outside Philistia," Kletter said. "People living in Iron Age Philistia could identify themselves by city or religion, and not necessarily by an ethnic group."

Is it the first Philistine cemetery ever discovered?

Neither Mazar nor Kletter agree with the assertion that the cemetery found at Ashkelon is the only known Philistine cemetery.

Kletter has been excavating an ancient city in Israel called Yavneh, which he says also contains artifacts that can be identified as "Philistine." Additionally, he and his colleagues found a cemetery there, which they described in the journal Atiqot in 2015. That cemetery also dates to a time when ancient texts say that Yavneh was a Philistine city. "I believe the people buried there [in Yavneh's cemetery] were Philistines," Kletter said.

Other sites with burials that could be considered "Philistine" have also been previously discovered both Kletter and Mazar said.

For instance, a Philistine cemetery at Azor, a site located near modern-day Tel Aviv, was excavated in the 1950s by the late archaeologist Moshe Dothan said Mazar. Additionally, some archaeologists consider burials dug up in southern Israel by British archaaeologist Sir Flinders Petrie a century ago to be Philistine, Mazar added.

"Ashkelon is not a 'first,' but it is certainly an important find," Kletter said.

Identifying a burial as that of a Philistine is difficult because archaeologists have to use ancient records of the areas that the Philistines ruled and try to confirm, using the artifacts they find, that the people in a cemetery are Philistine and not from other groups. These findings are published in scientific journals and can be the subject of debates that can go on for many years.